A former Olympian and fifth president of the International Olympic Committee is responsible for the Asian Art Museum's very existence. Avery Brundage gifted the City of San Francisco his entire collection in stages, which upon his death in 1975, totaled more than 7,700 Asian art objects. The museum had now outgrown its original location in Golden Gate Park, which it had shared since its inception with the DeYoung Museum. Larger quarters were needed. 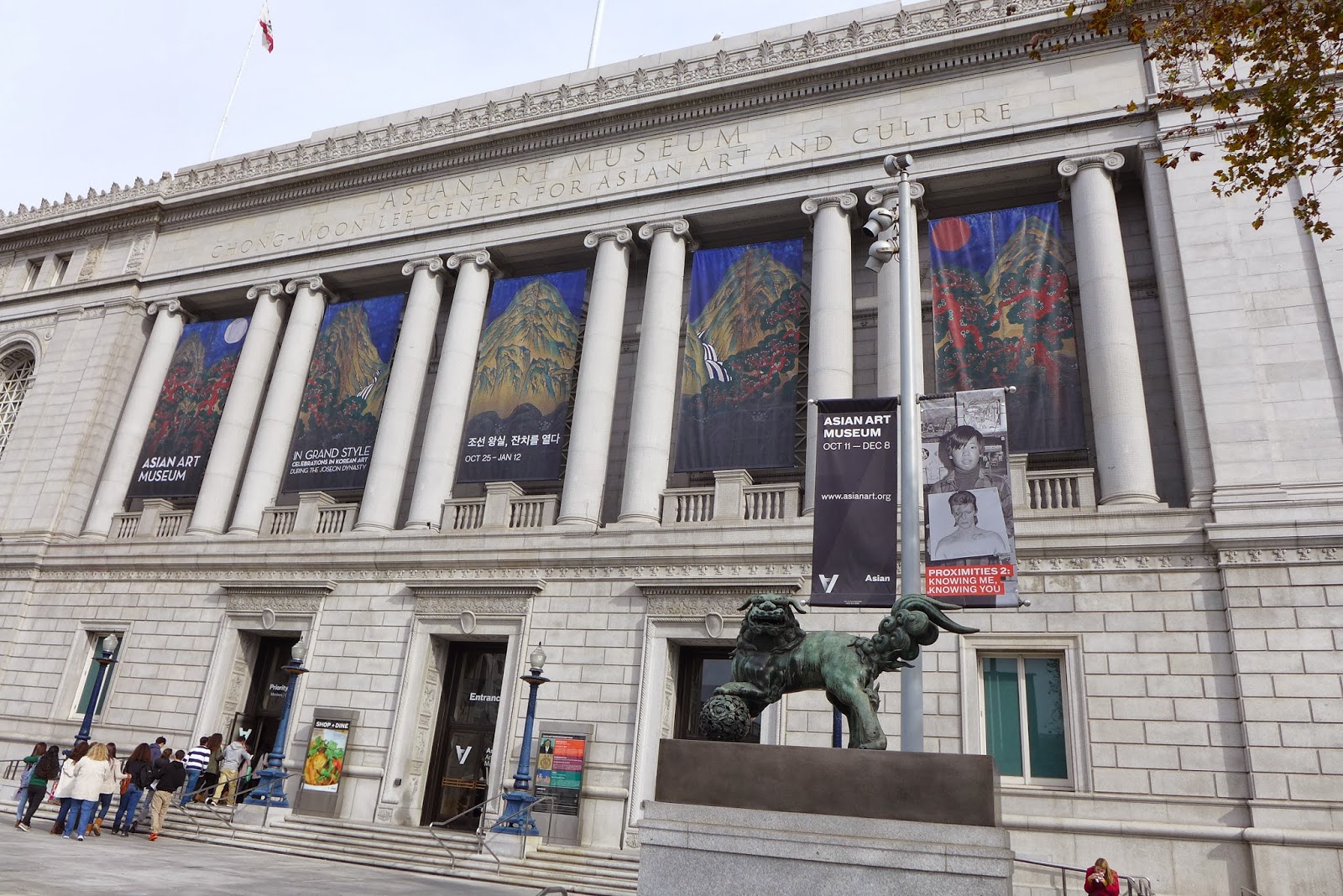 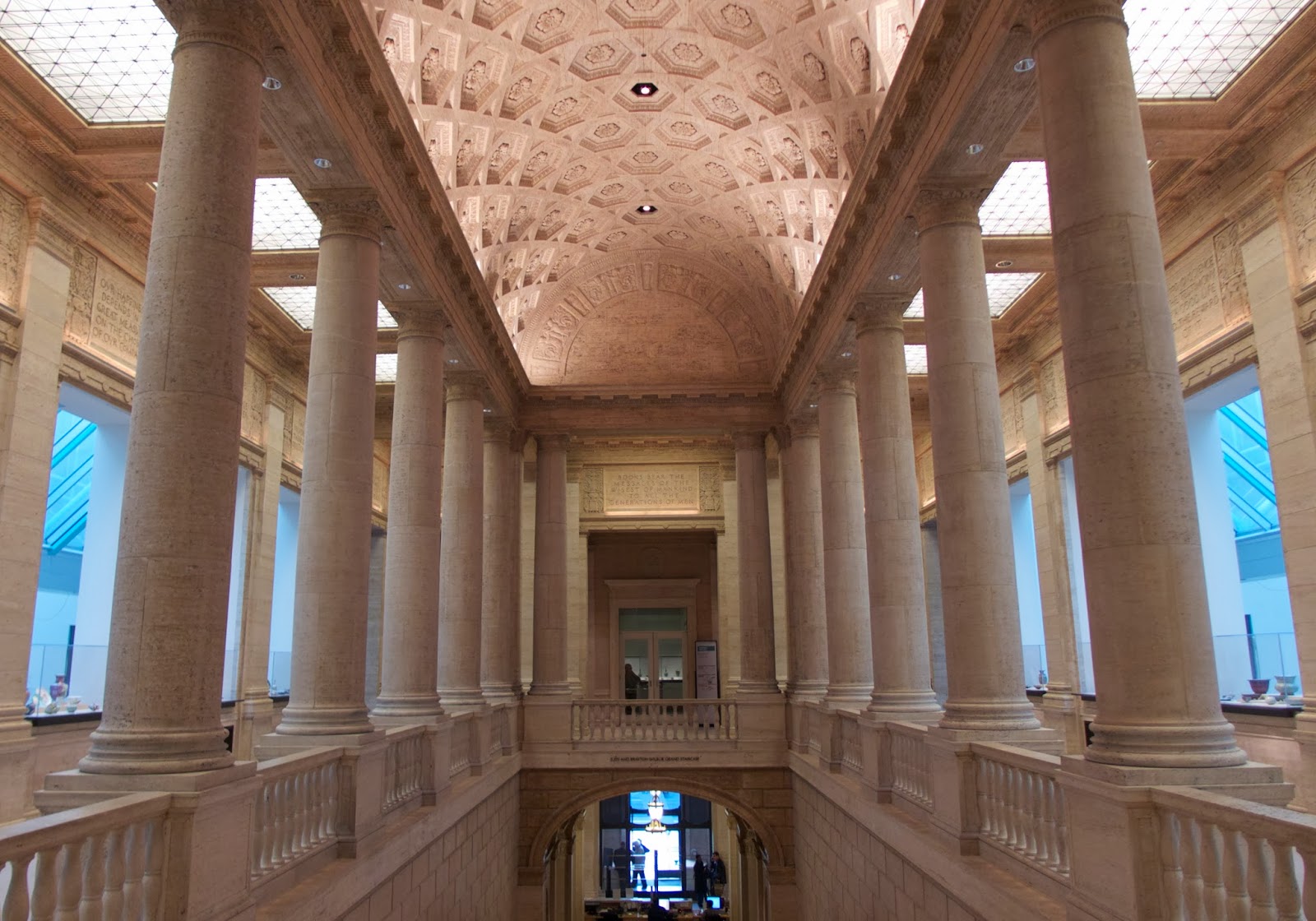 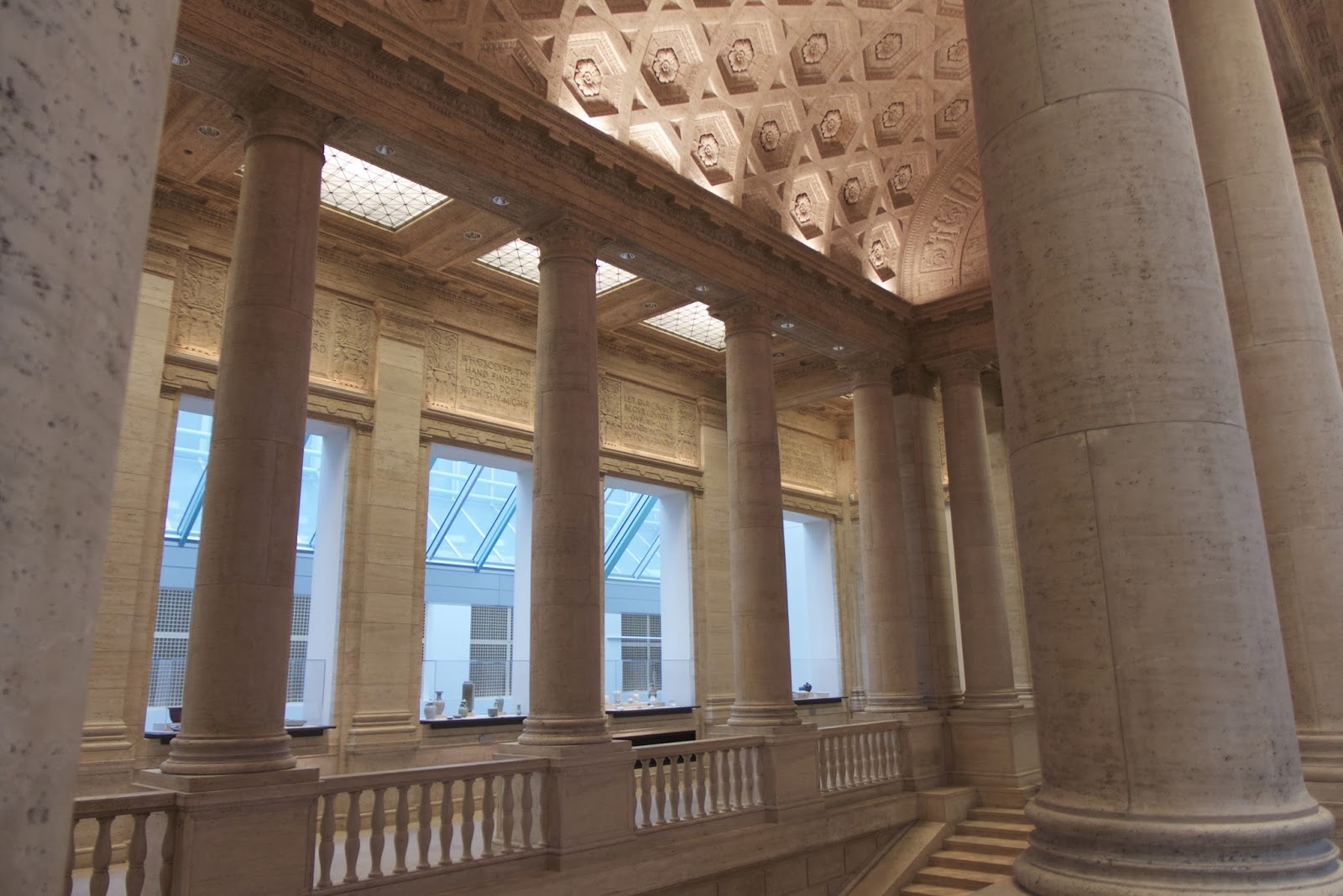 Italian architect Gae Aulenti was commissioned to repurpose the building and design its spacious expansion. Well known for her conversion of the Parisian Beaux Arts Gare d'Orsay train station into Musée d'Orsay, and the Contemporary Art Gallery at the Centre Pompidou, she was also responsible for many other prestigious museum projects worldwide prior to her death in 2012. In 2003, with 75 percent more space than before, doors to the Asian Art Museum's new home opened. 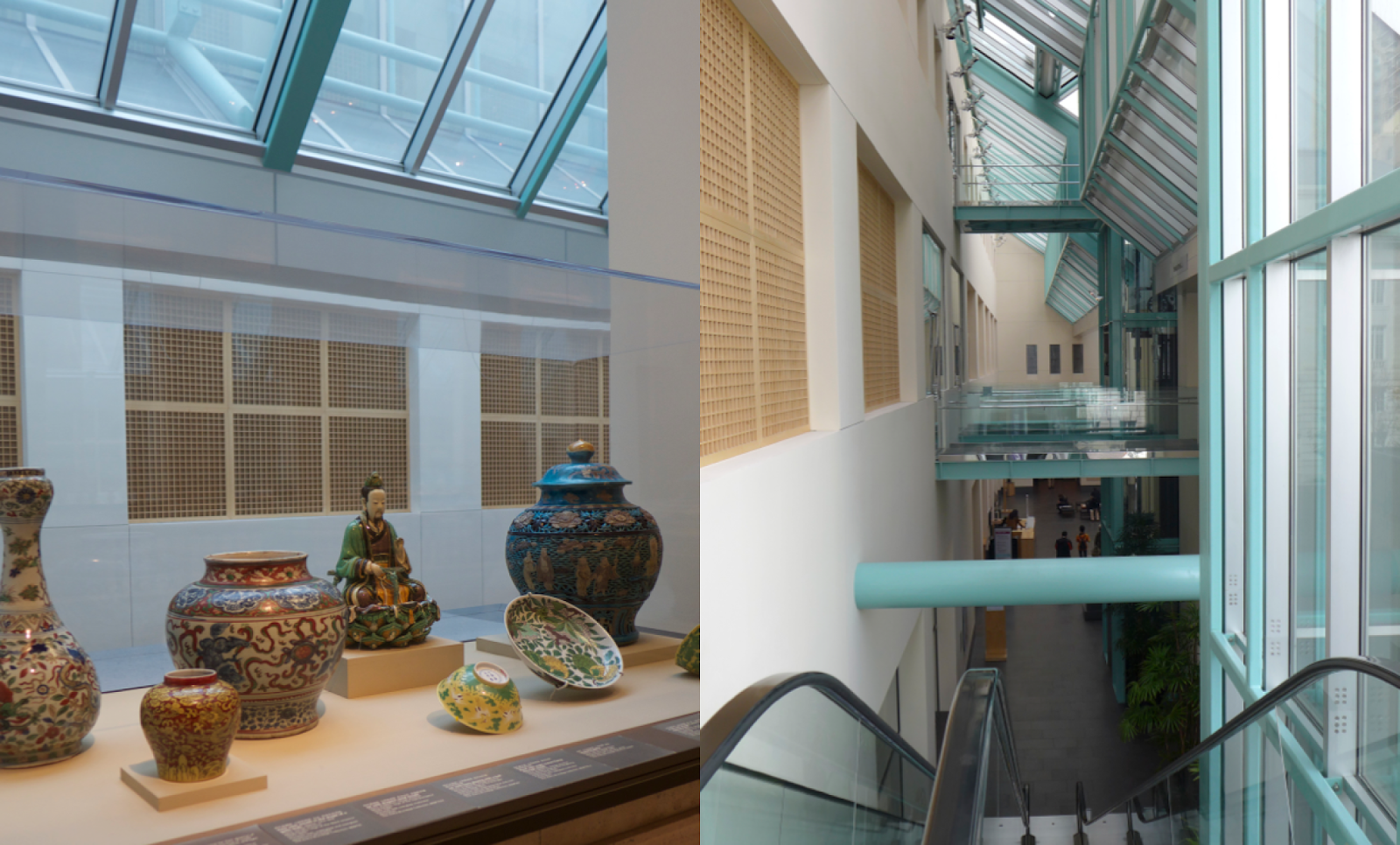 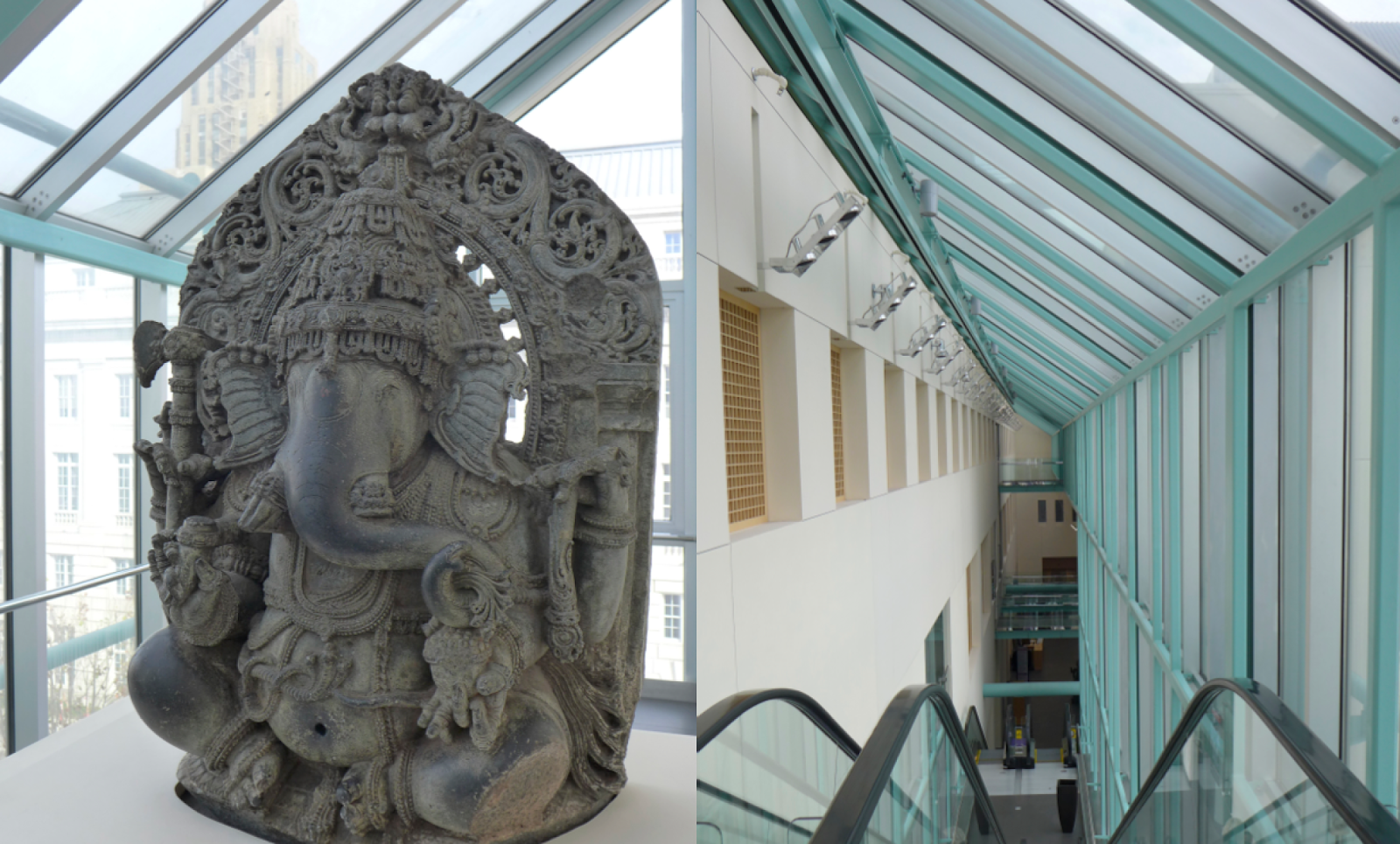 At the end of a long escalator ride to the top floor, Ganesha, beloved Hindu deity associated with beginnings, greets visitors prior to entering the galleries. One of many statues of the deity in the museum, this is the most intricate one, carved out of a soft stone that hardens over time. Ganesha is known as the "Remover of Obstacles" and the common practice of leaving money and chocolates as offerings got so out of hand that the museum finally placed a donation box next to the statue in order to protect it. 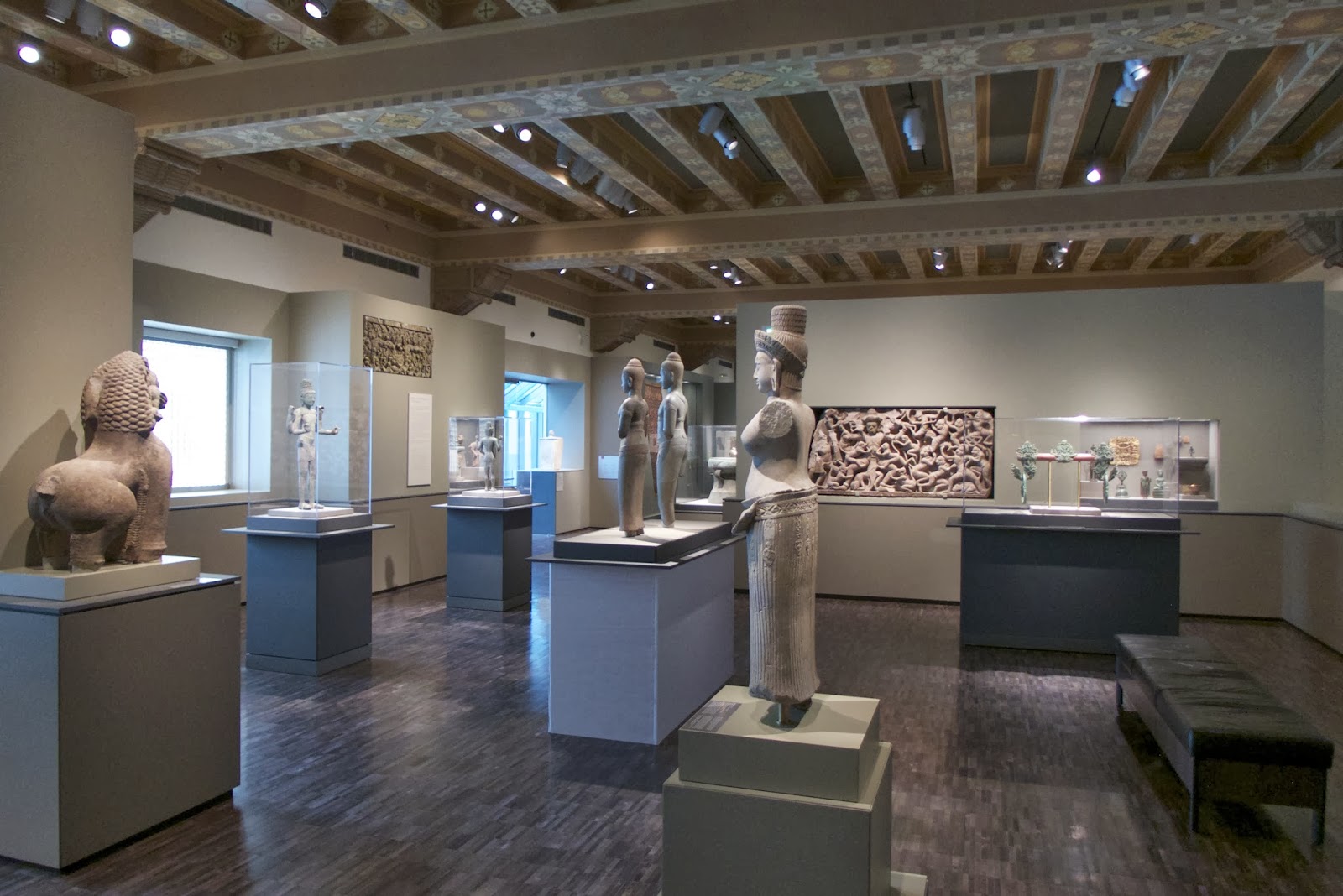 The staff is comprised of specialists in Chinese, Japanese, South Asian, Persian, Himalayan, Southeast Asian, and Korean art. In 2011 the museum was rebranded with an upside down 'A' meant to represent a fresh new way of looking at Asian Art. Their website is a fantastic educational tool for teachers and those of us who just want to learn more and we'll be making ample use of it today. 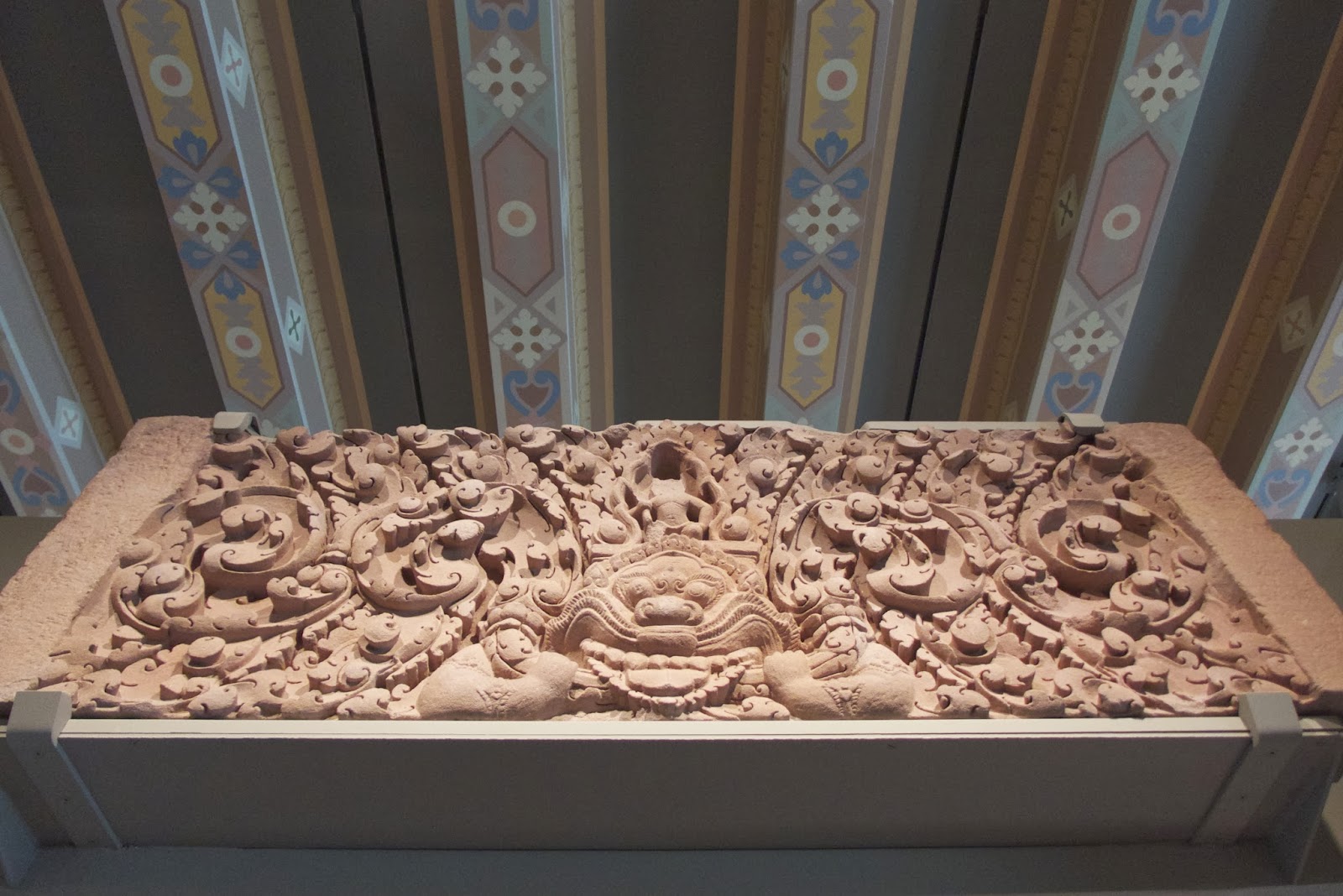 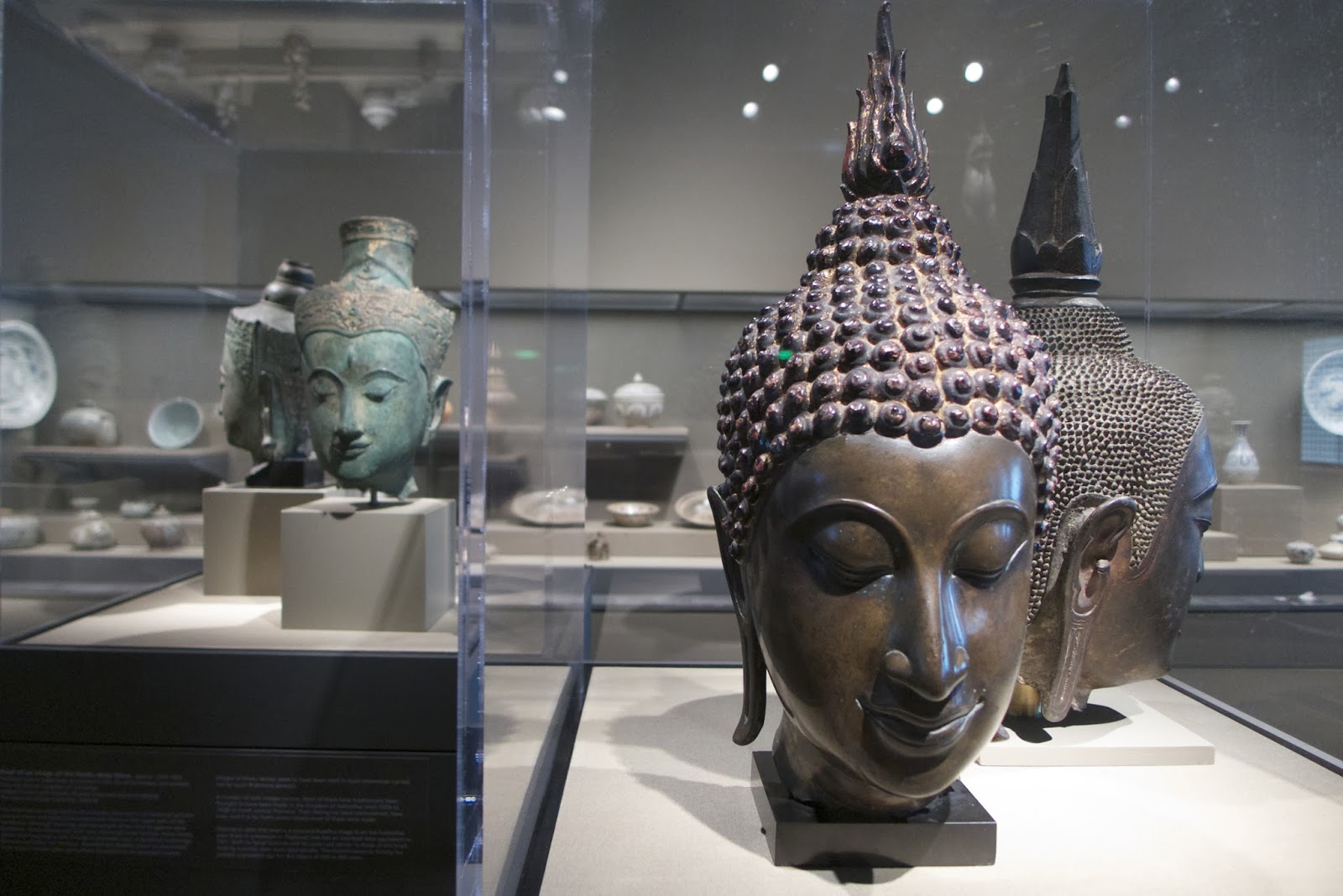 Two Thai kingdoms' styles from 1350 to 1440 are represented by these bronze Buddha heads. The oval Sukhothai head from the north, above, has stylized curves that epitomize serenity and beauty, even among today's Thai people. Below, the Ayutthaya head is more squared and angular, projecting firmness and power. 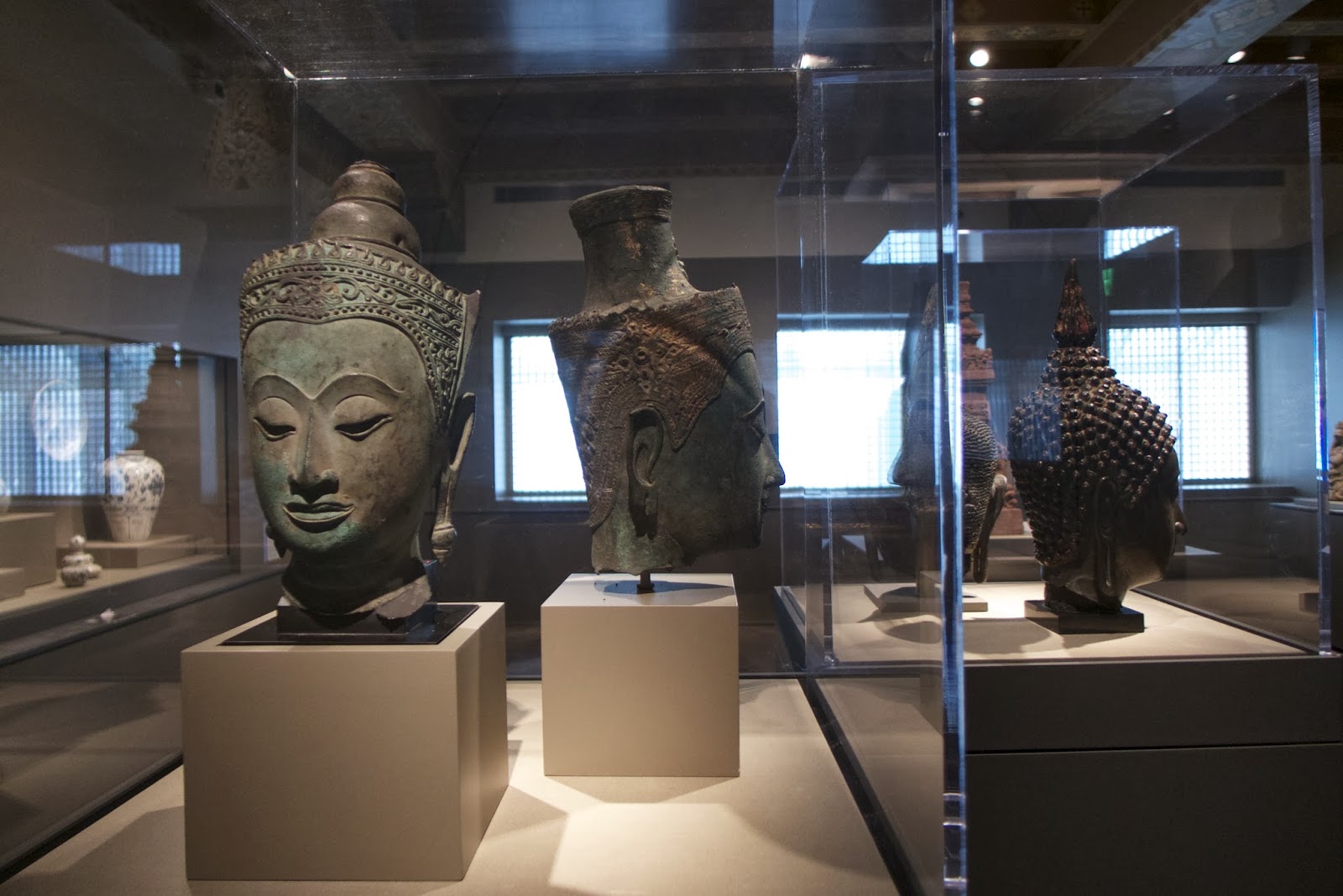 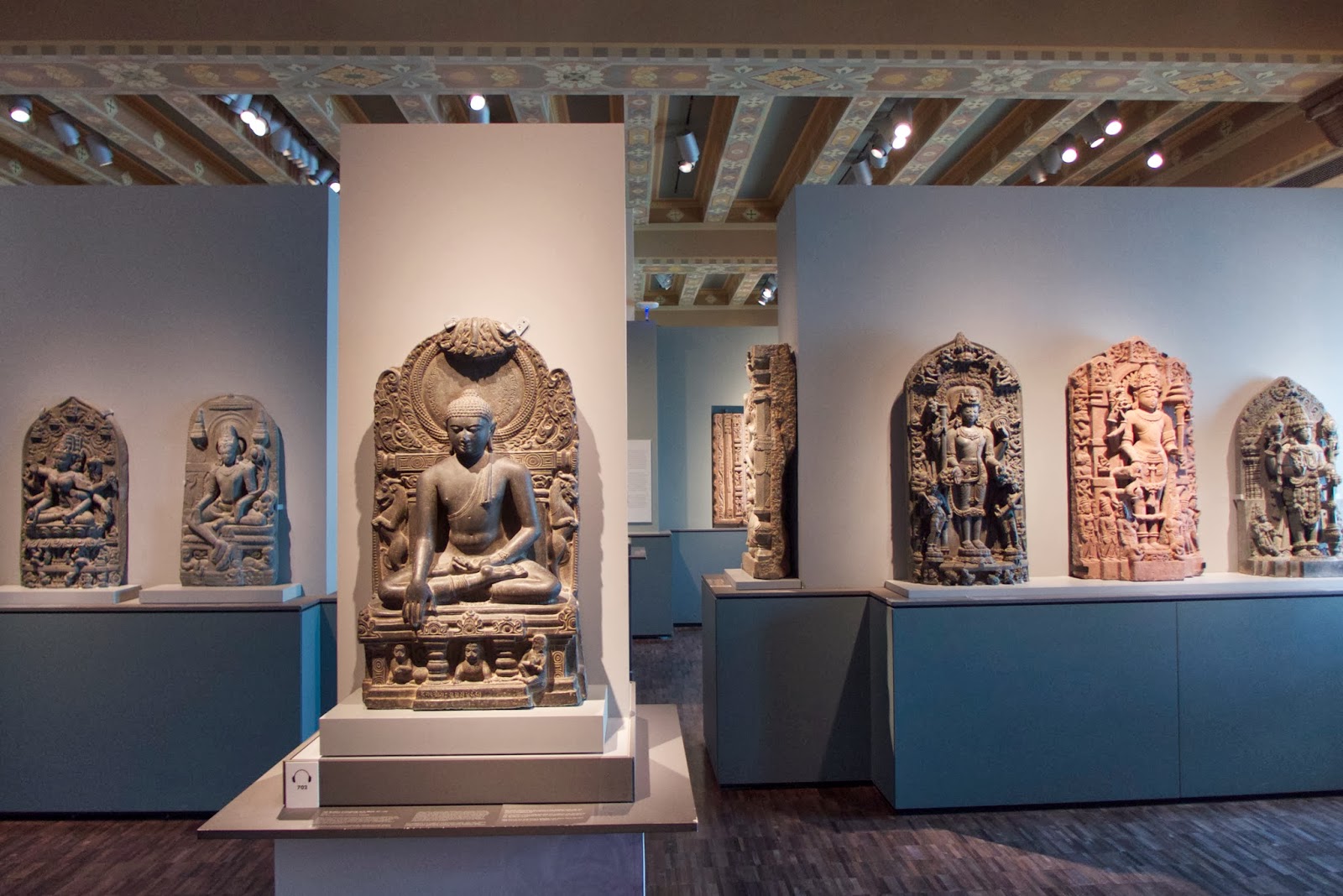 The center statue from India depicts Buddha triumphing over Mara, a story that celebrates persistence and determination. In a nutshell; after lifetimes of preparing to achieve enlightenment, the near-Buddha is challenged by the demon Mara, an embodiment of violence and uncontrolled passions. Mara keeps tempting and challenging him, trying to throw him off course. But the Buddha-to-be prevails and finally achieves Buddha-hood. 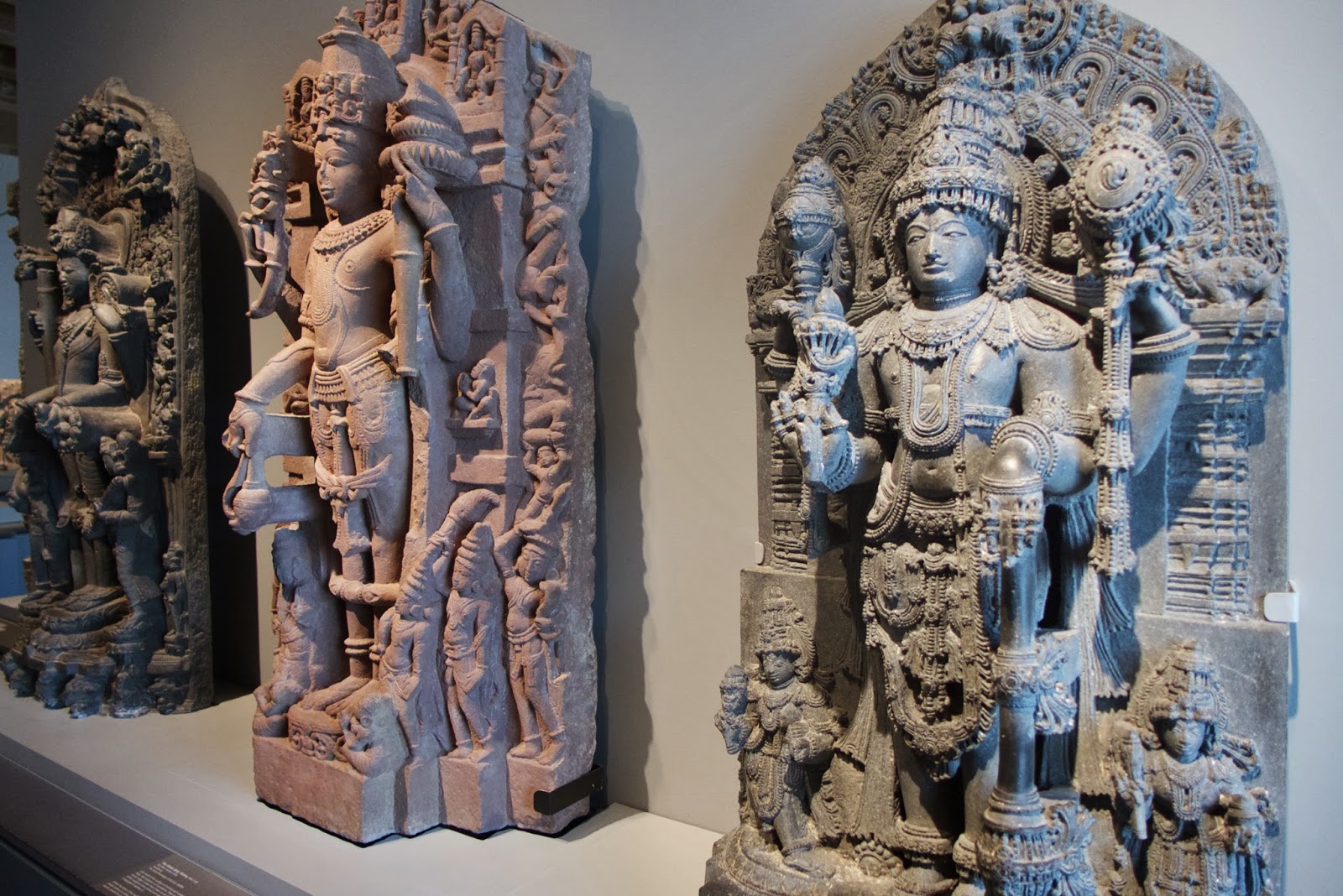 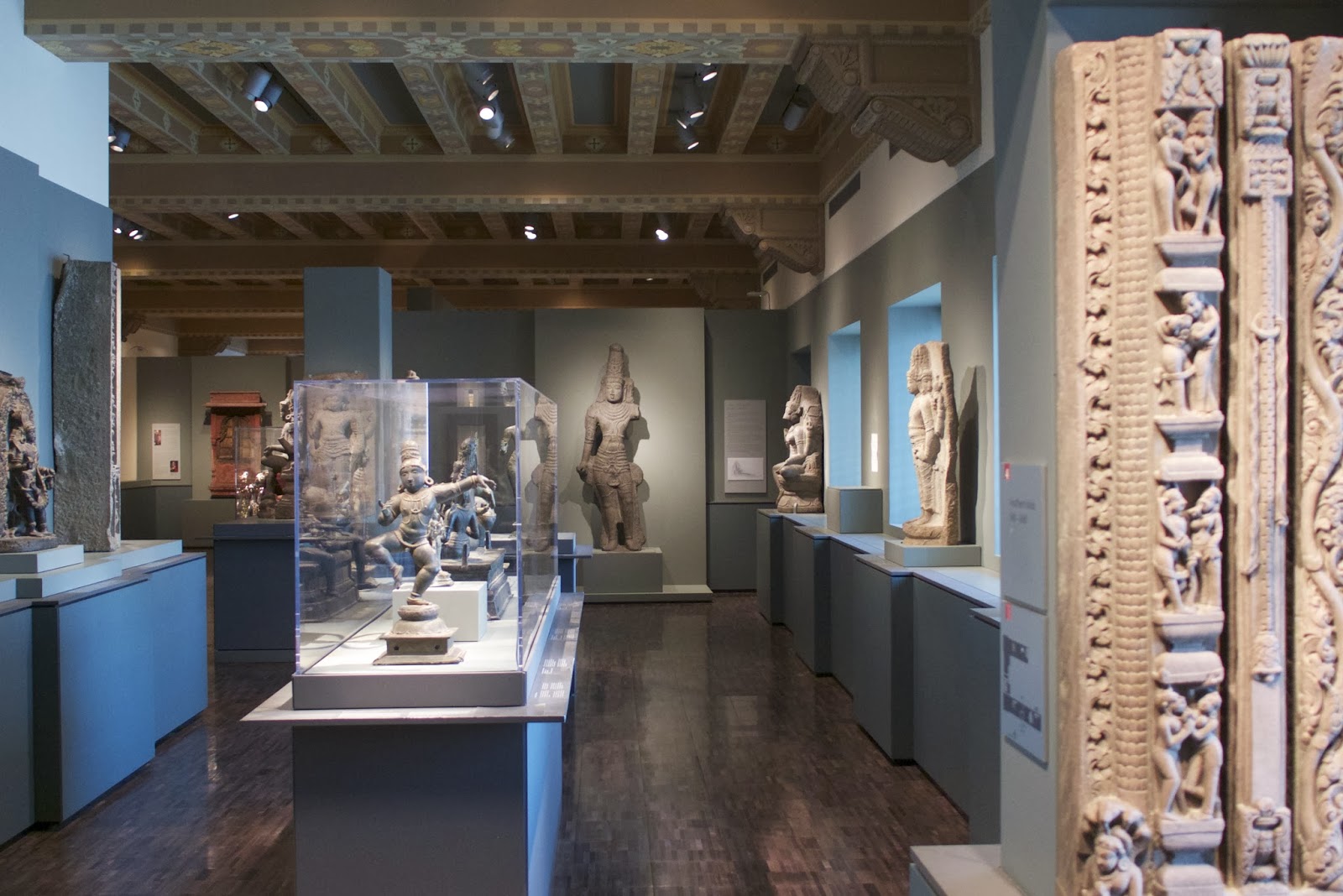 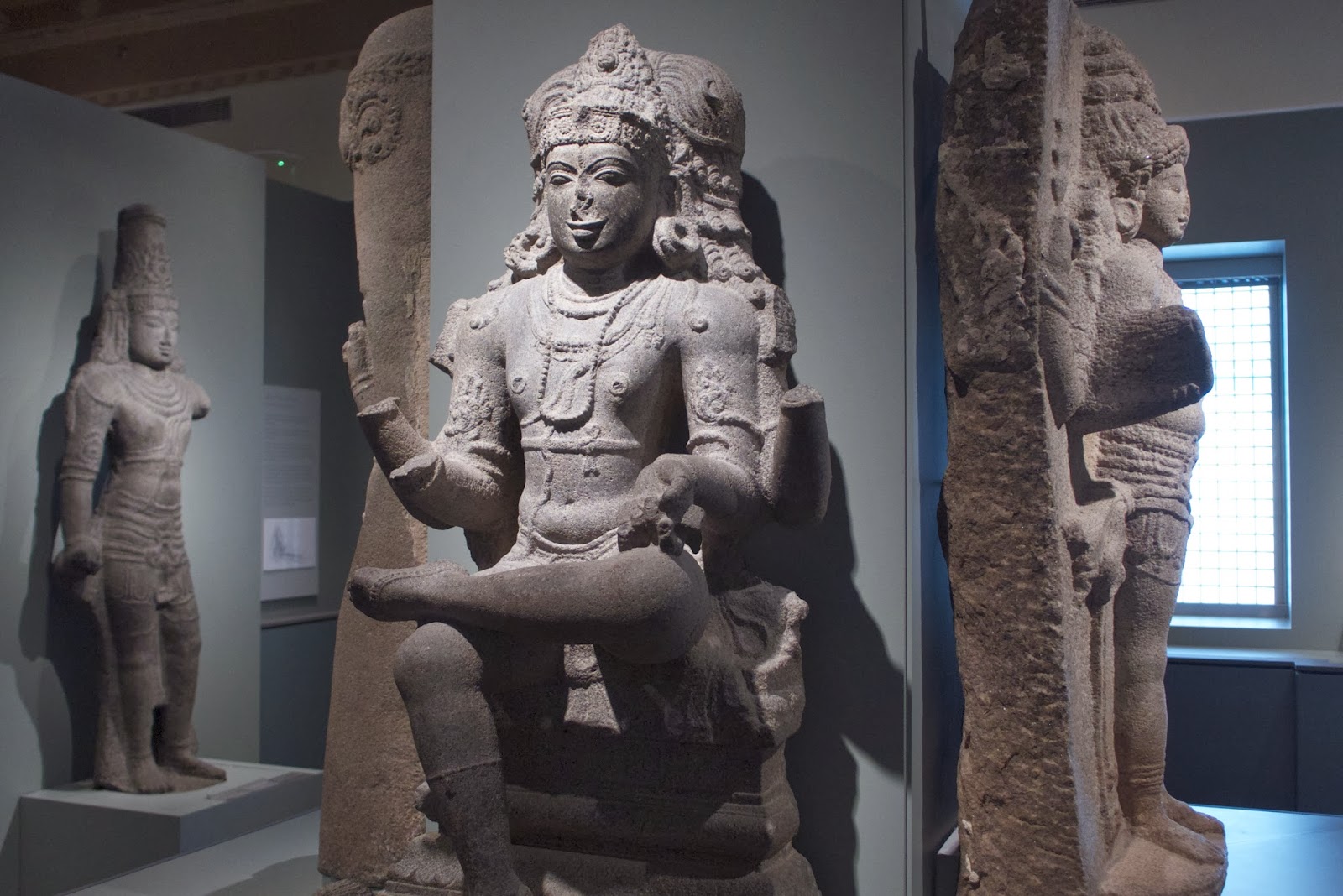 This granite sculpture from India, created between 1100 and 1200, depicts the Hindu god Shiva teaching the sages. The supreme deity for many Hindus, Shiva has a complex divine personality and is often identified by a vertical third eye on his forehead, and a small snake, skull, and crescent moon in his hair. 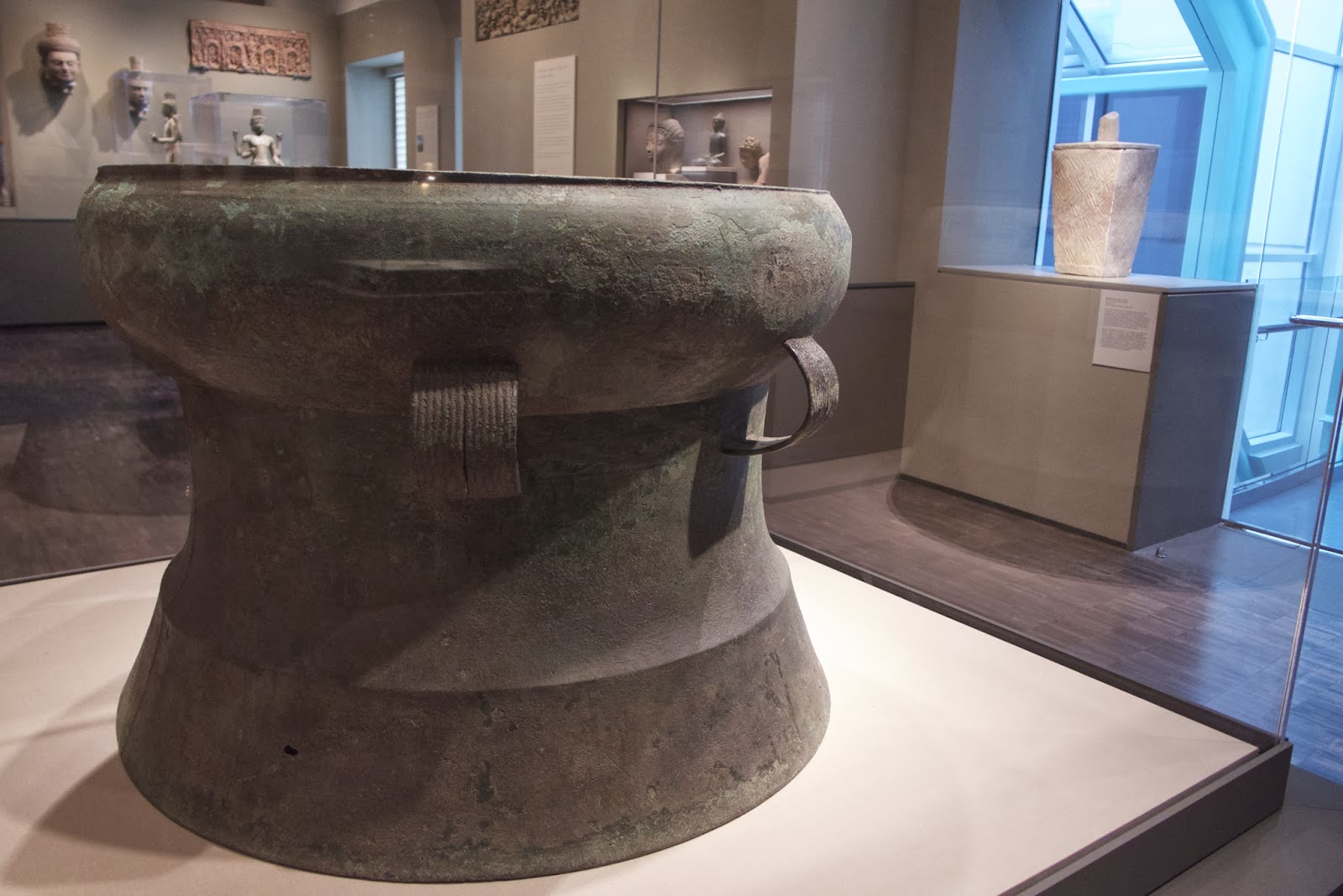 Bring on the drums! 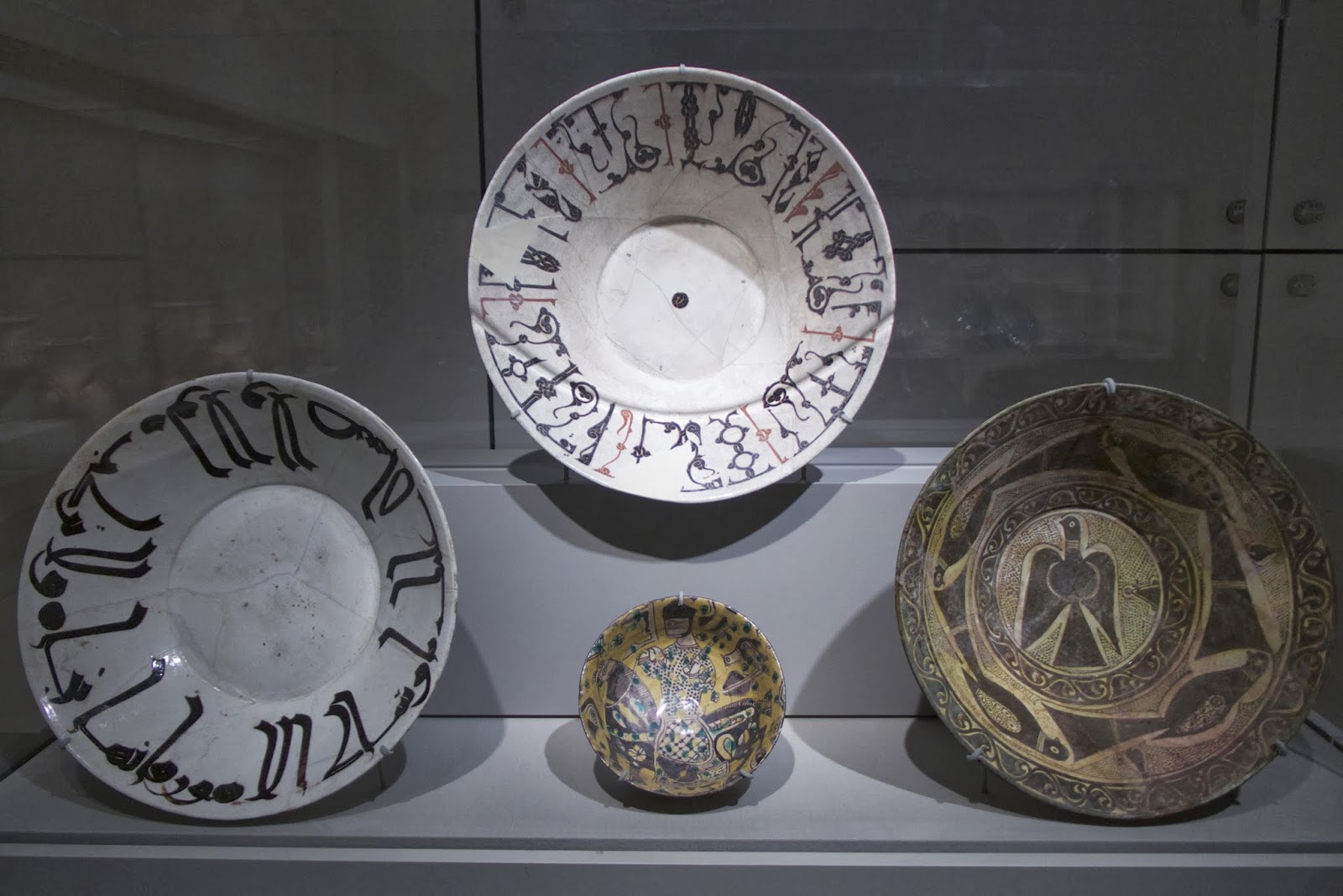 These ceramic bowls from Iran and Uzbekistan were made between 800 to 1000 and decorated with Arabic inscriptions. The one on the left is written in a more linear Kufic script. All of the bowls contain proverbs or good wishes rather than religious sayings or verses from the Koran, as one might think upon first glance. 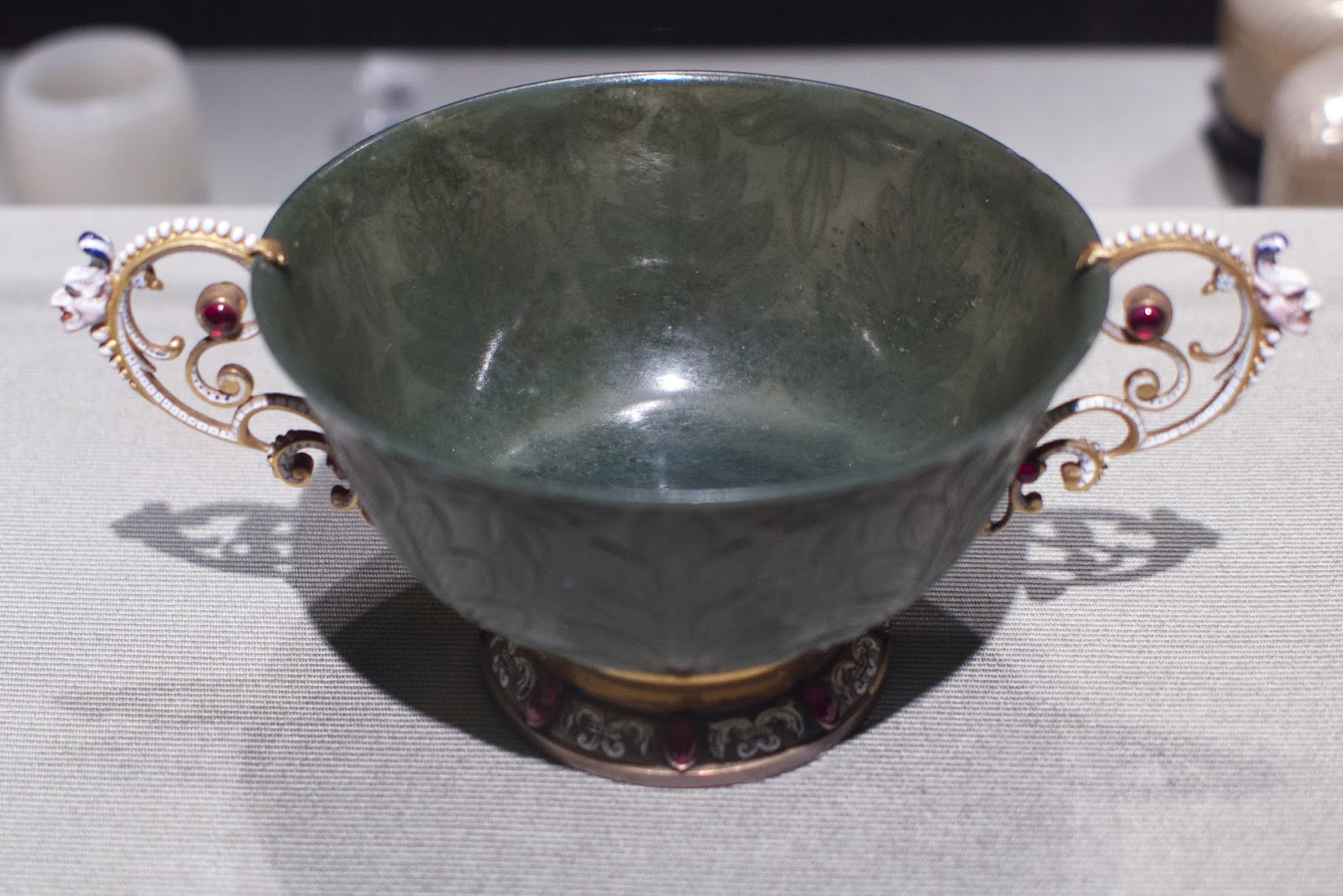 Travel is a beautiful thing, as evidenced by this Mughal jade cup. Carved in India, identifiable by the thin jade walls of foliage on the bowl, it was then brought to France for the addition of footing and handles by famed Parisian jeweler Jules Wiese. 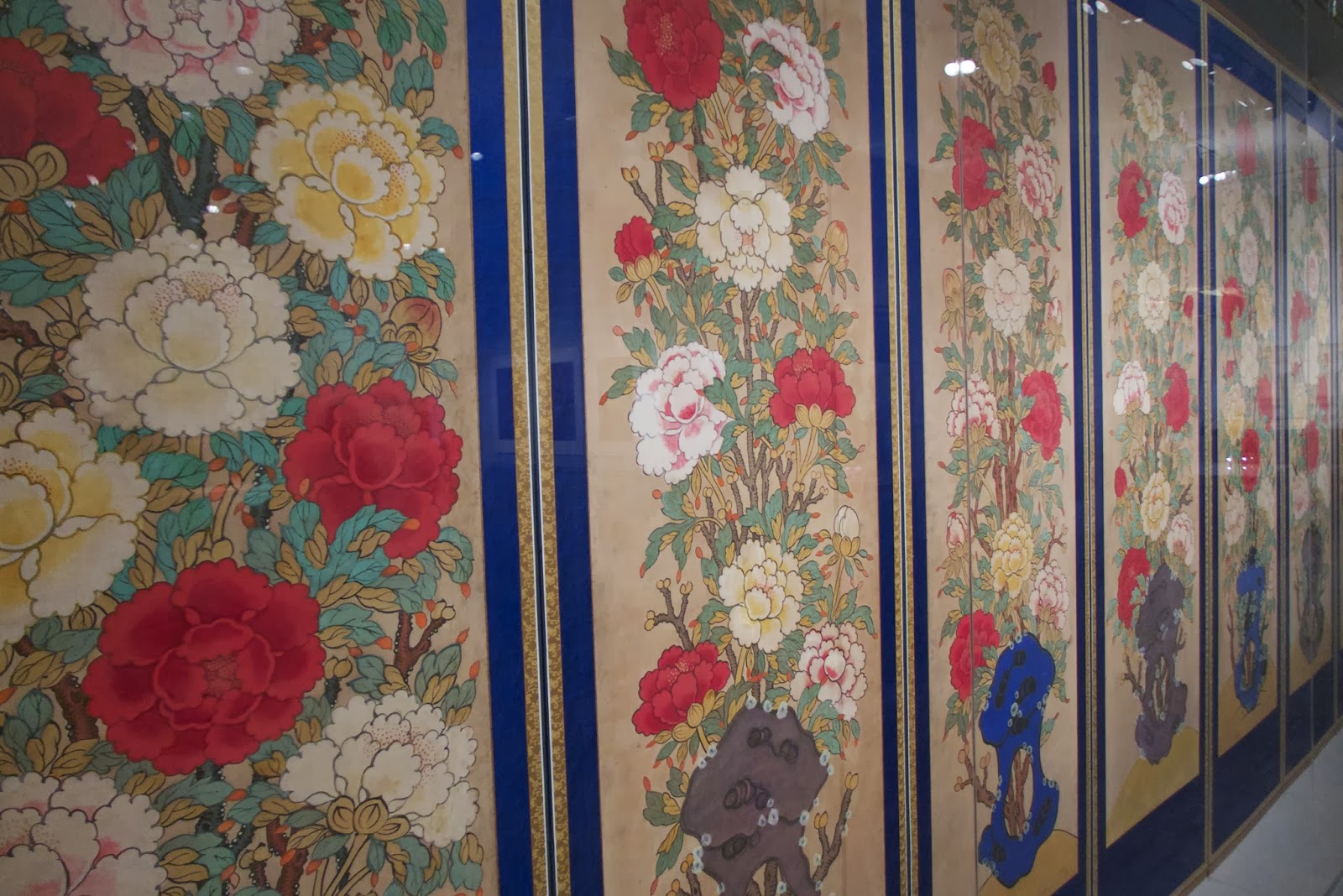 In Grand Style was a fabulous exhibition that examined Korea's Joseon dynasty from 1392 through 1910. Twenty-seven kings and queens ruled throughout that spectacular 500 year period. Shown below are a royal wedding garment and hair ornaments. 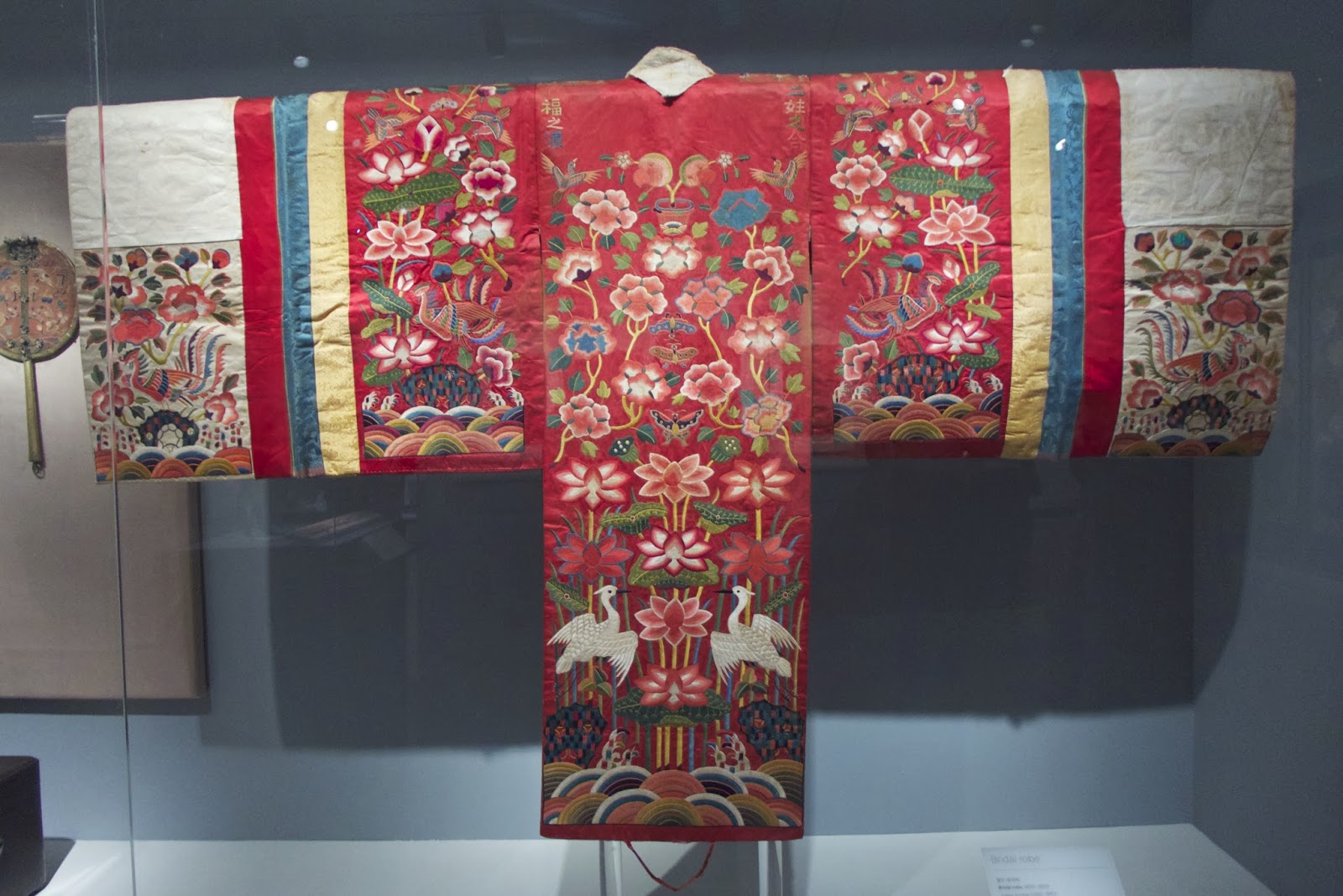 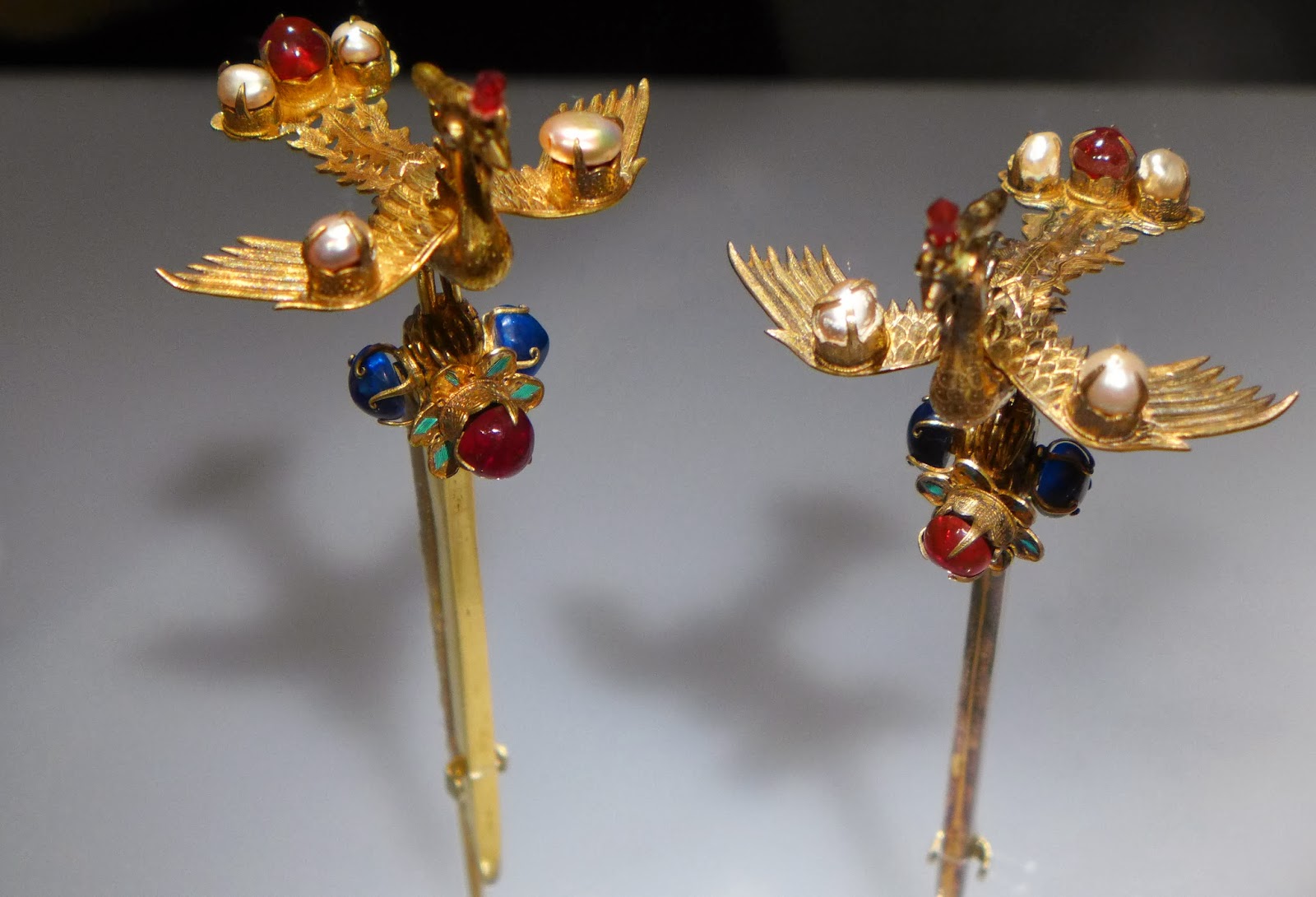 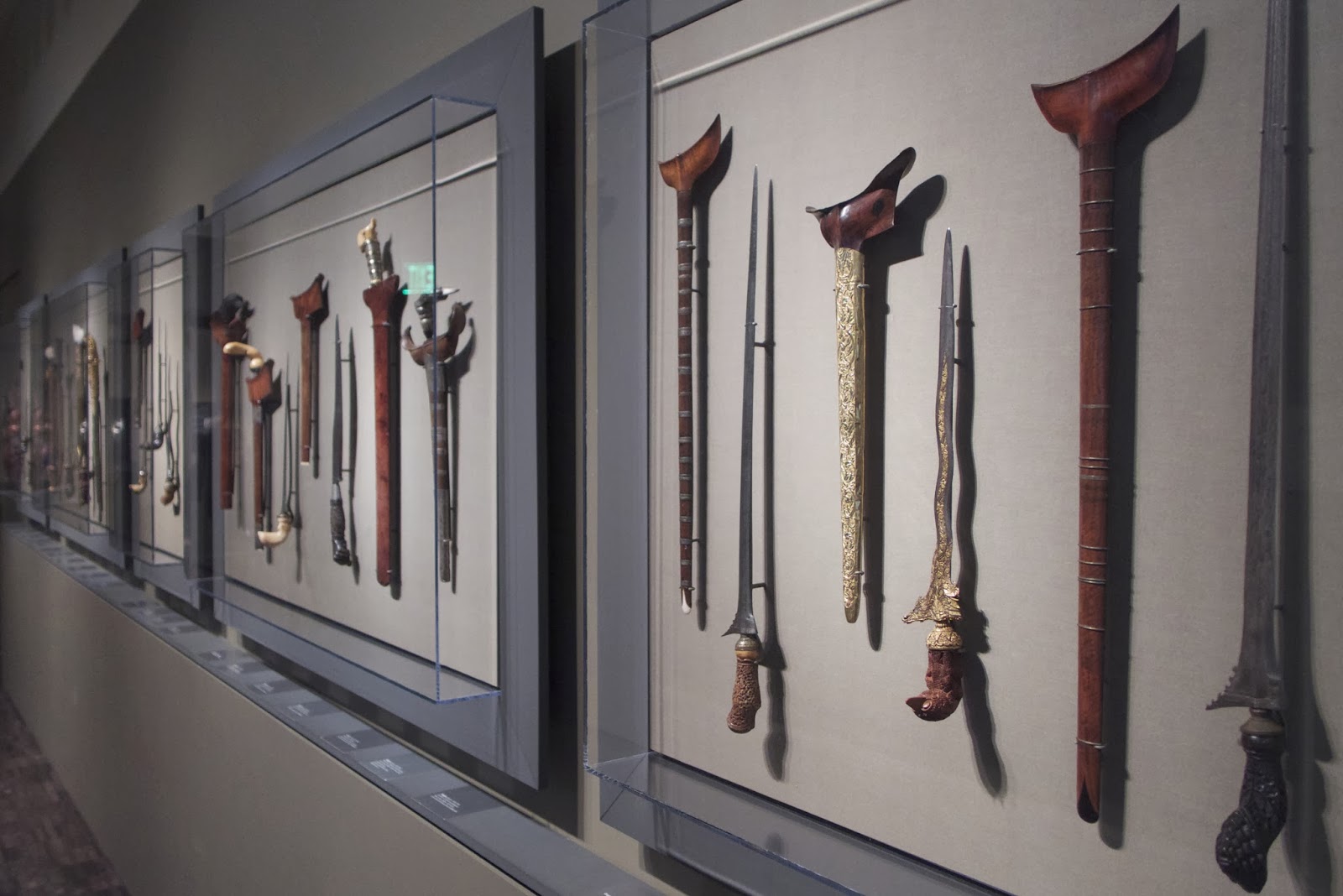 The beauty of these intricately carved swords from all over Asia belies an often savage history of use throughout the centuries. Learn more about the deity shown below right. The rows of Indonesian puppets from the wayang golek (puppet theater) brought back wonderful memories of my time living in Yogyakarta, Java in 1979. Once a month puppeteers, called dalang, perform familiar stories from the Ramayana or the Mahabharata - two great epic Sanskrit poems - from early evening into the next morning. This they do after fasting and praying in order to maintain energy and get into the meditative state necessary to properly deliver the stories, which citizens of all ages know. We lasted until about 3 a.m. the night we attended, but on the route home, radios could be heard softly broadcasting the performance from every little shop and house throughout the city. It was magical. 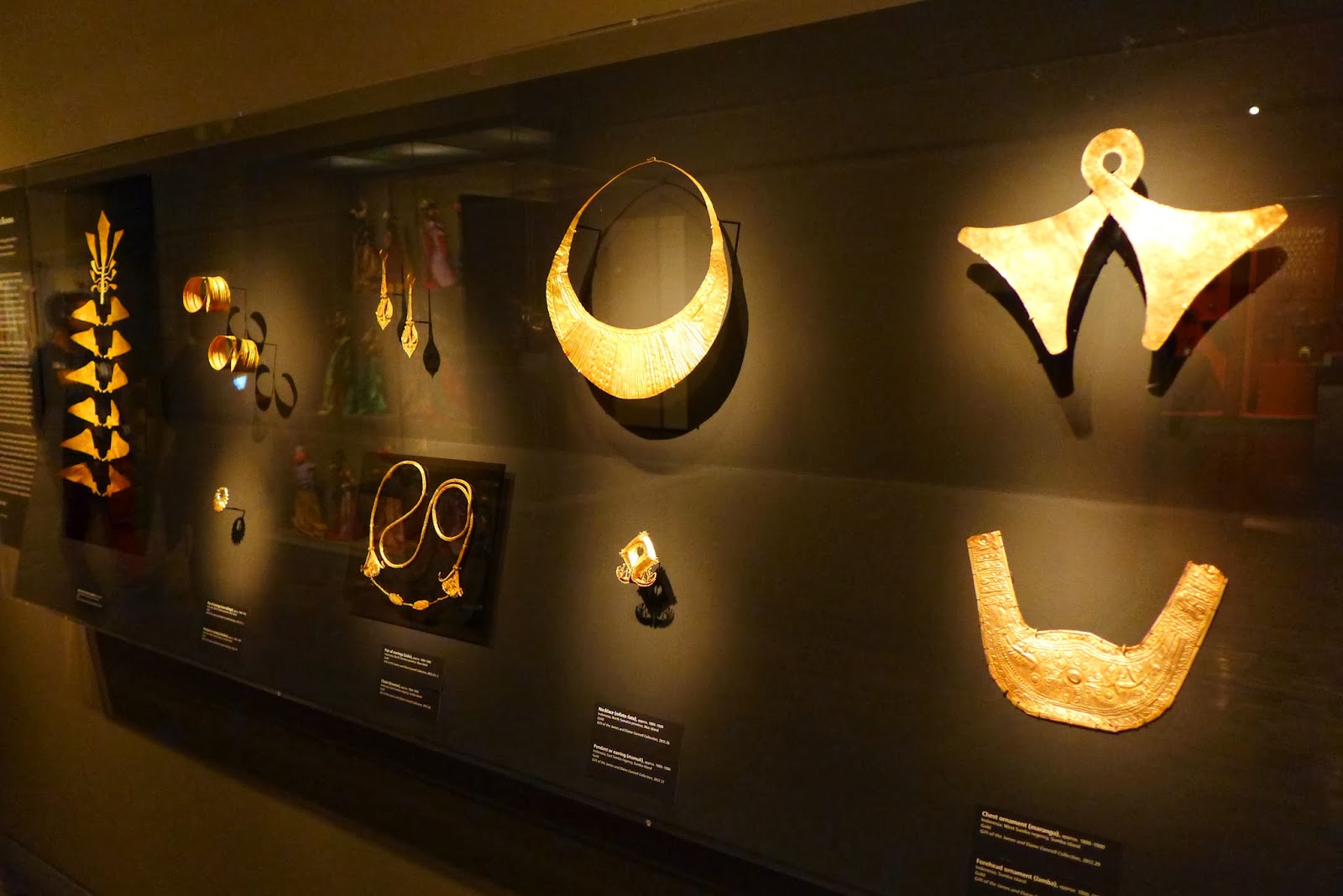 Hard to believe this beautiful contemporary-looking gold jewelry is hundreds of years old. 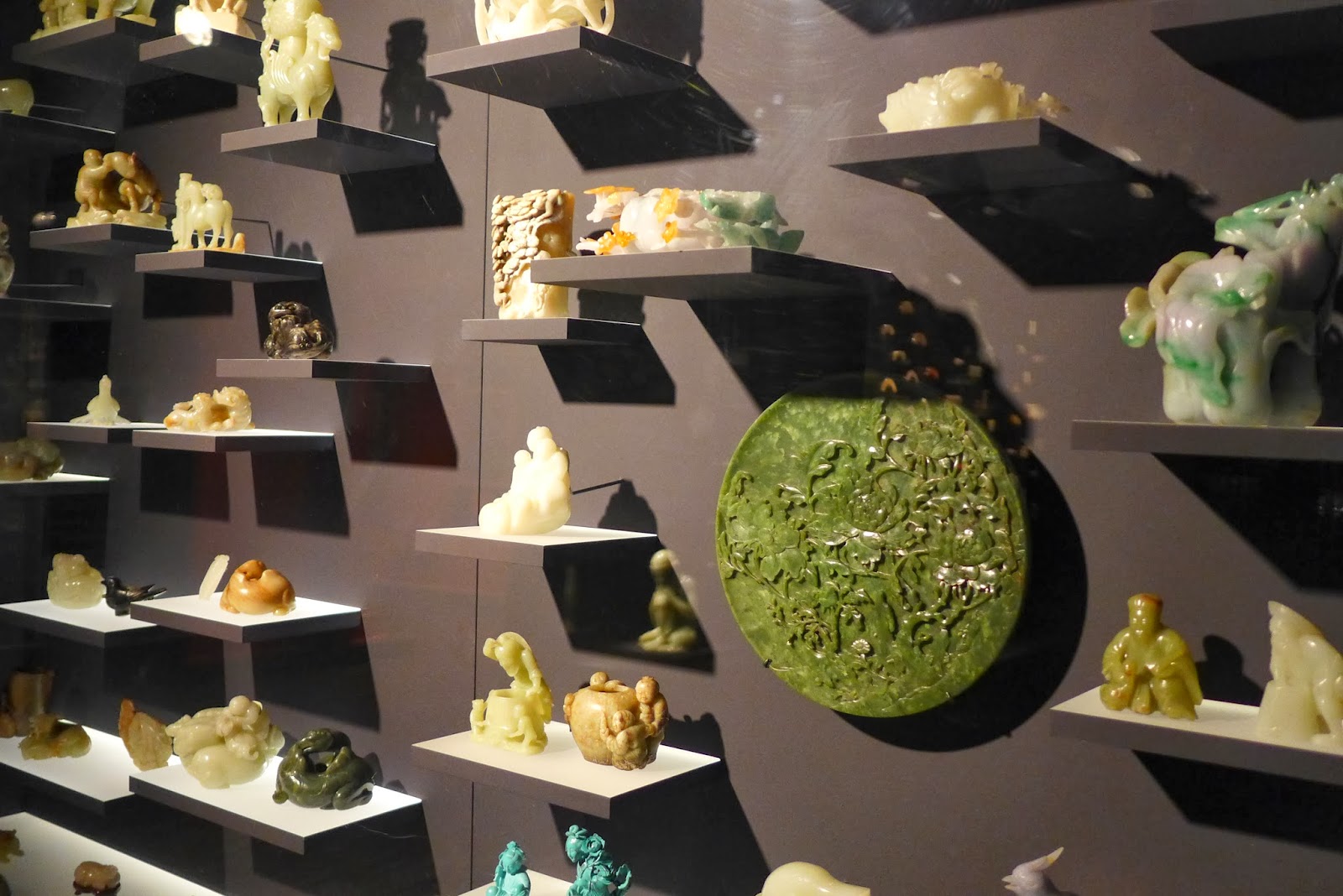 The importance of jade in the Chinese culture is highlighted in this small jewel of a room. Objects seem to float in clear cases set in the middle, and surrounded by other displays, the reflections give the objects an etherial effect. 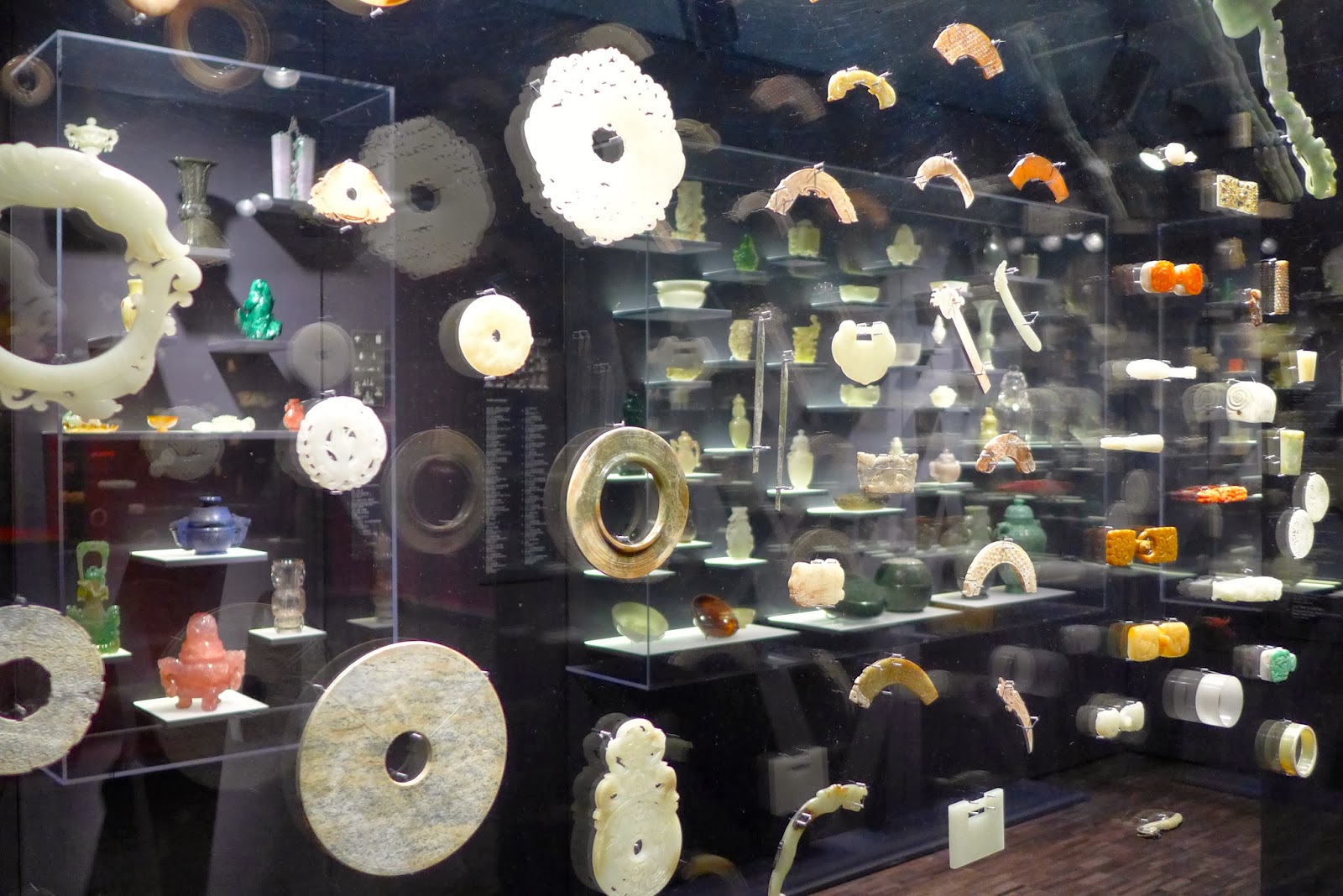 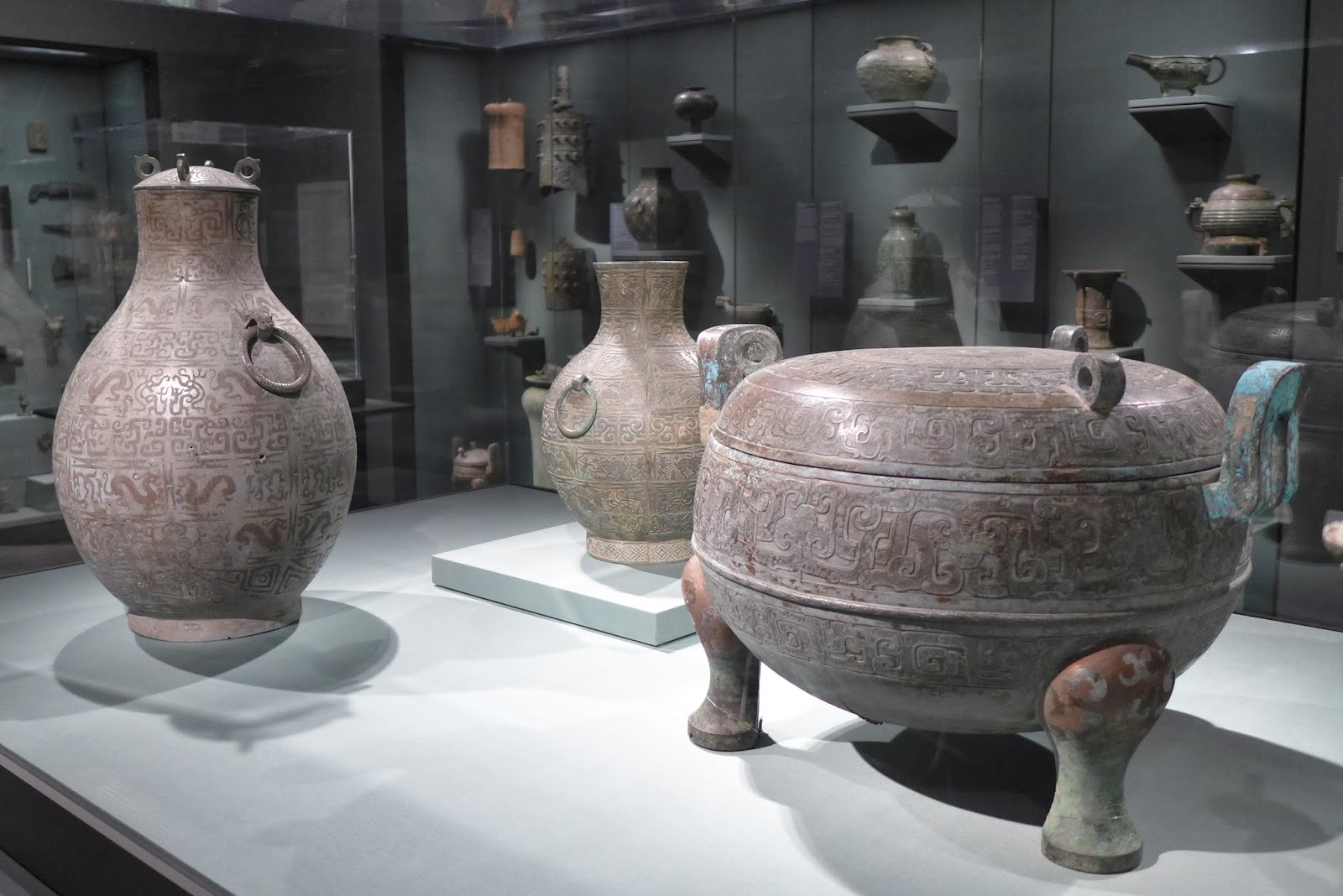 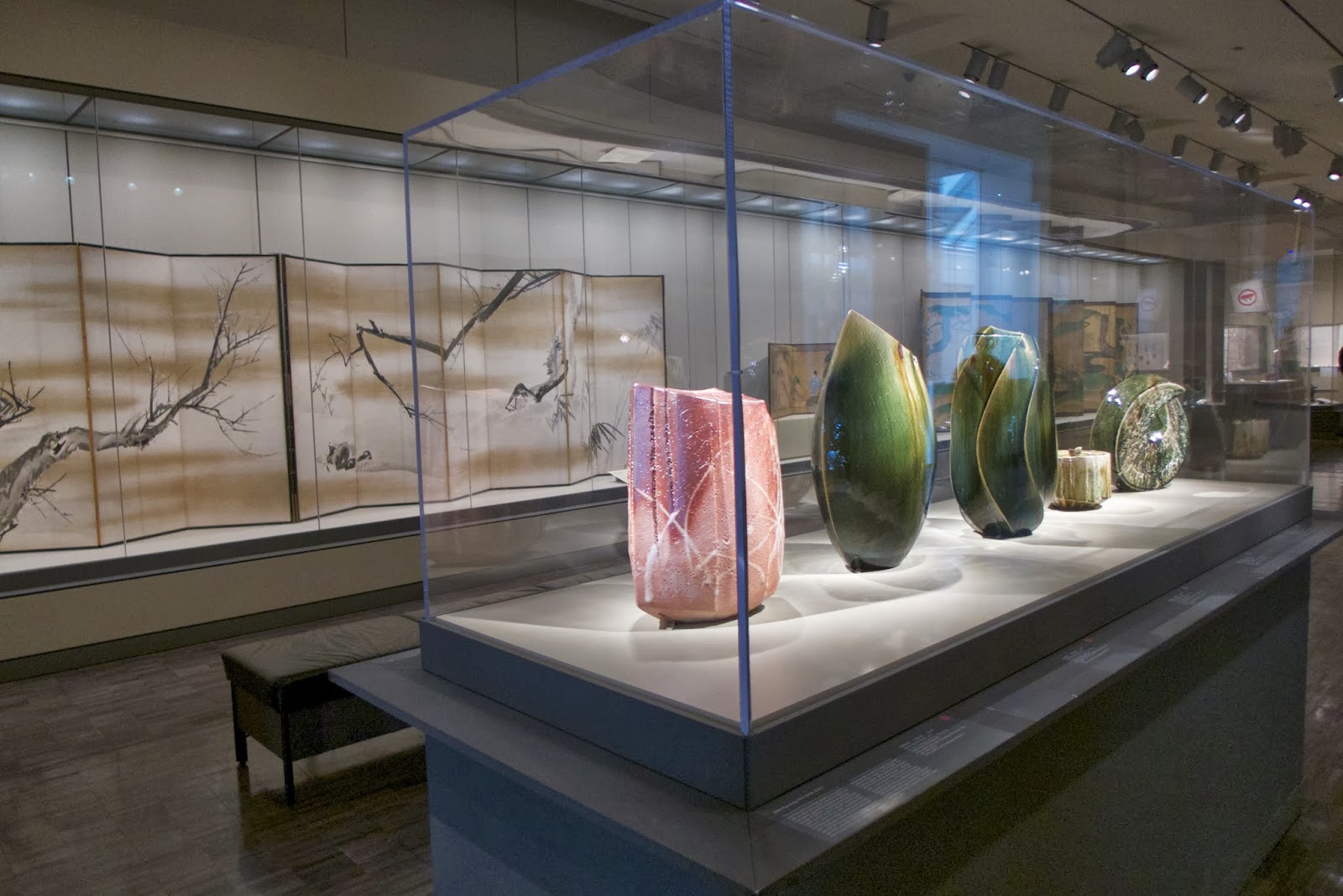 Modern vases in the foreground are beautifully juxtaposed with older hand painted screens. 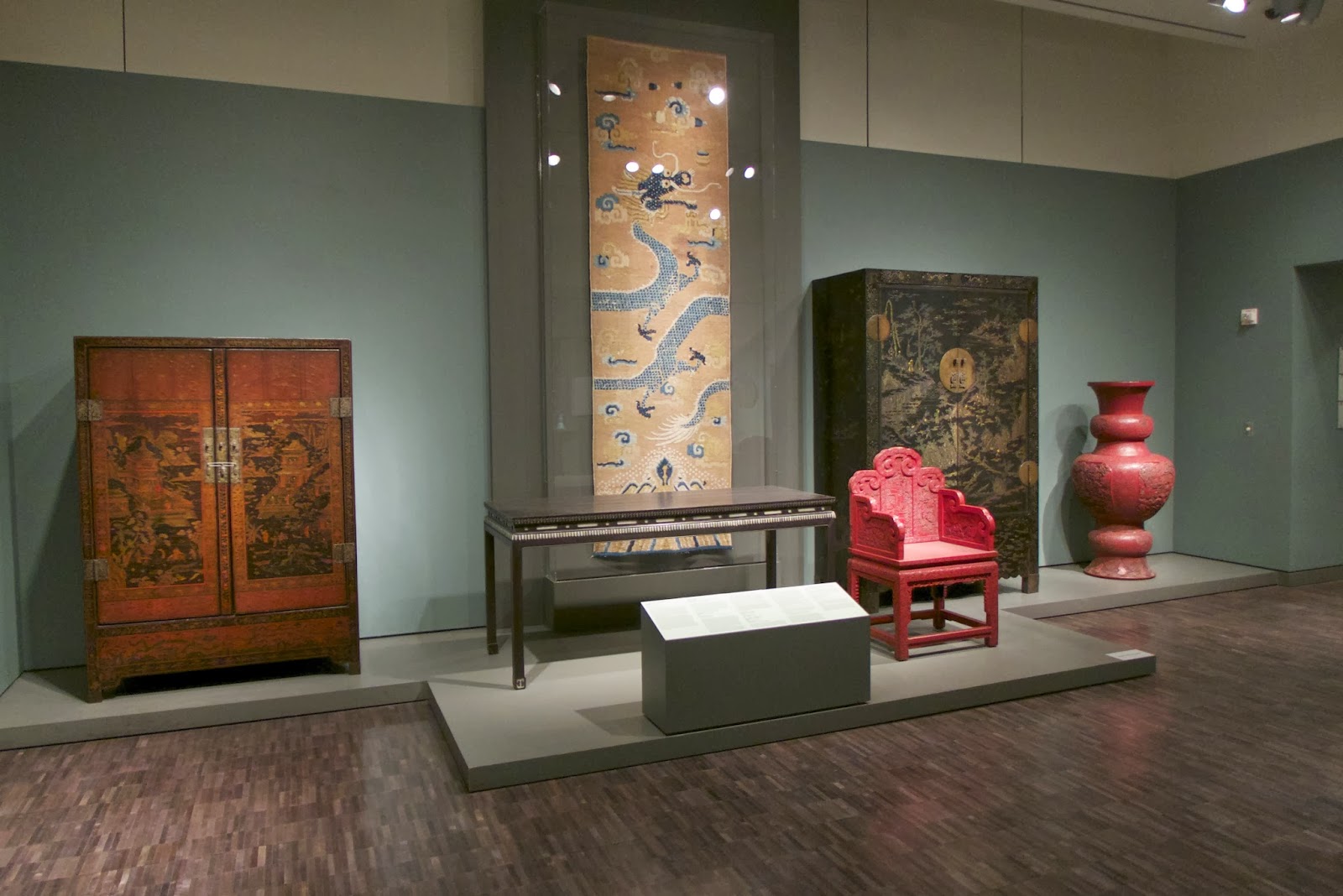 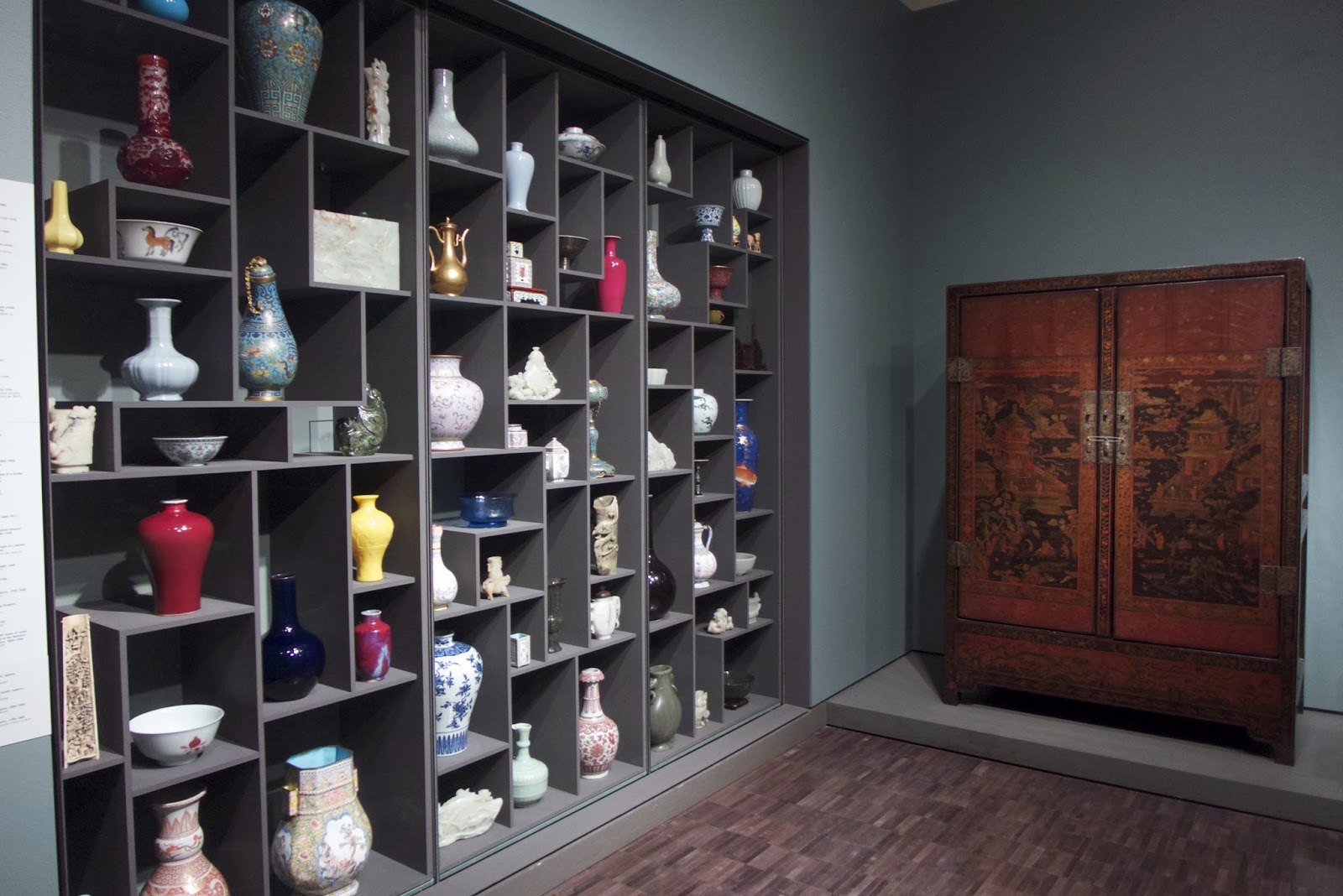 Niches are used to house everything from Chinese vases to Indian deities. And now, gazing at the peaceful Buddha below seems a fitting way to end this tour - with a little more tranquility in our hearts and minds than when we began.