The Craft & Folk Art Museum is a little gem that packs a big punch.The small size of CAFAM allows for more intimate, accessible exhibitions than its neighbors across the street, Los Angeles County Museum of Art and LaBrea Tar Pits & Page Museum. Walking down Museum Row on Wilshire Boulevard, we need only take a quick sidestep to enter a whole other world. 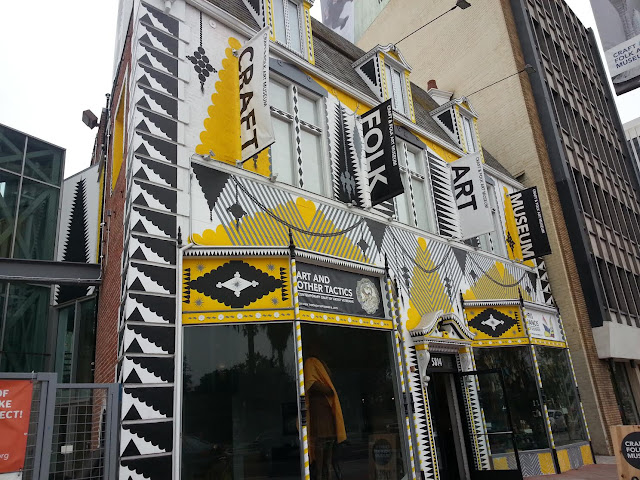 Founded by collector Edith Wyle as a gallery in 1965, it became a museum eight years later. Back in the day, it was fun to walk through fabulous tapestry exhibits either before or after a delicious brunch at The Egg and the Eye restaurant on the third floor. That eatery has since been replaced by gallery space, beloved Edith has passed on, and the museum has been through a chaotic period. Thanks in large part to former longtime director and board chairman Patrick Ela, CAFAM survived and is now thriving under the new leadership of Suzanne Isken, former Education Director of LA's Museum of Contemporary Art (MOCA). 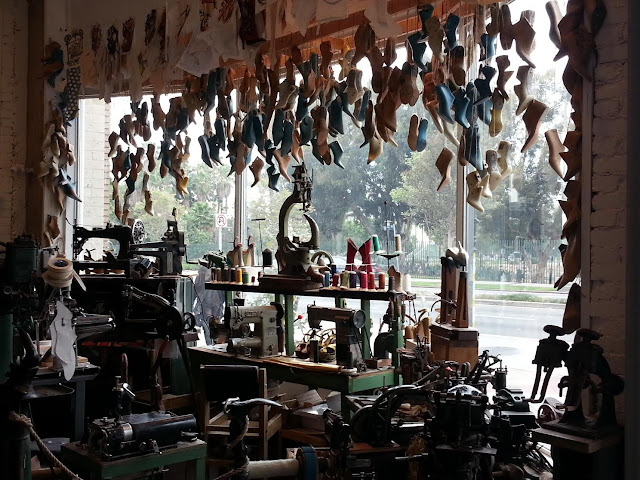 Teaching the public in fresh new ways has been one of Ms. Isken's major goals since taking up her new position a few years ago. In this case, we walk off the street, over the threshold, and into the magical world of a contemporary shoemaker whose studio is set up for months (through September 6) right there in the front window. 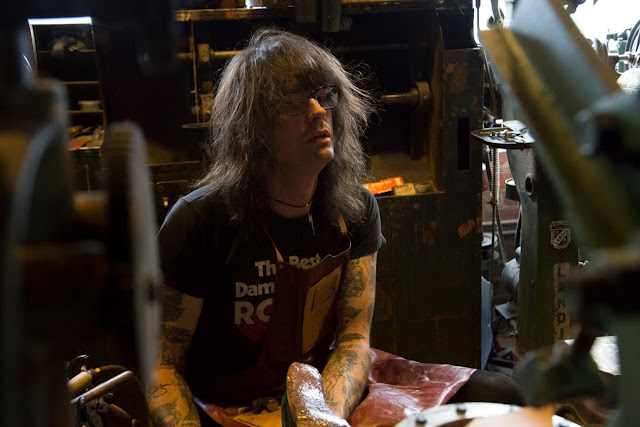 Combining a rocker artist's vision with rapidly disappearing, time consuming, old-school techniques, what Chris Francis does with a flat piece of leather is awesome. Meeting and talking with the personable artist, it was hard not to get caught up in his passion for the art and craft of shoemaking. 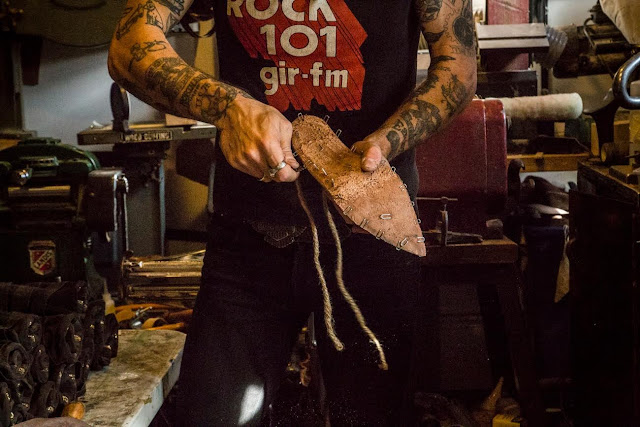 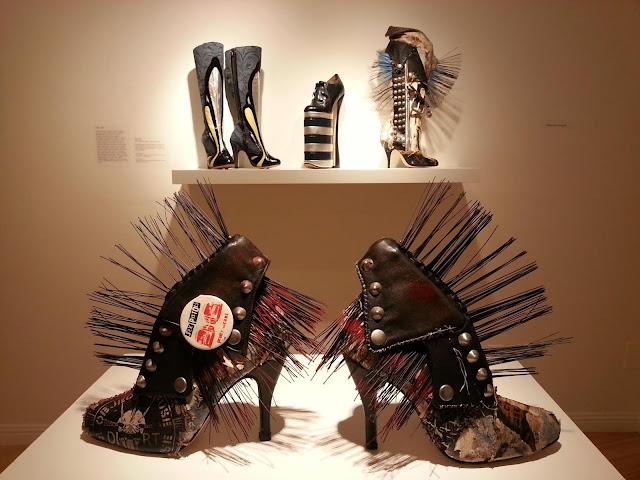 It's easy to think of wild boots like these kickin' it onstage, which is often the case. 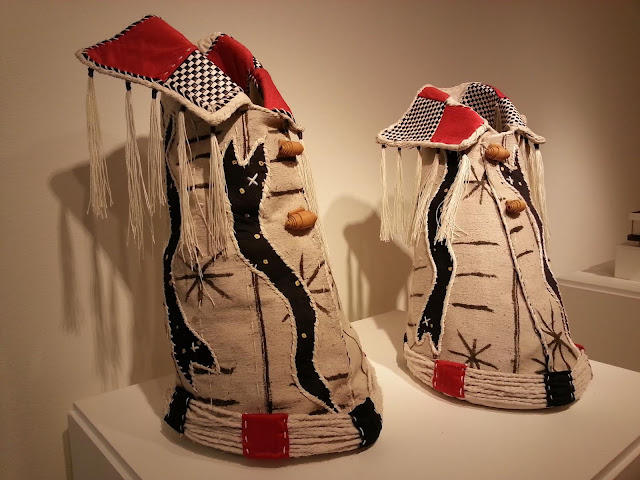 Taking inspiration from teepees and nomads, textiles, twine, and tassels invite a closer look at the time-consuming workmanship that goes into each fantasy for feet. 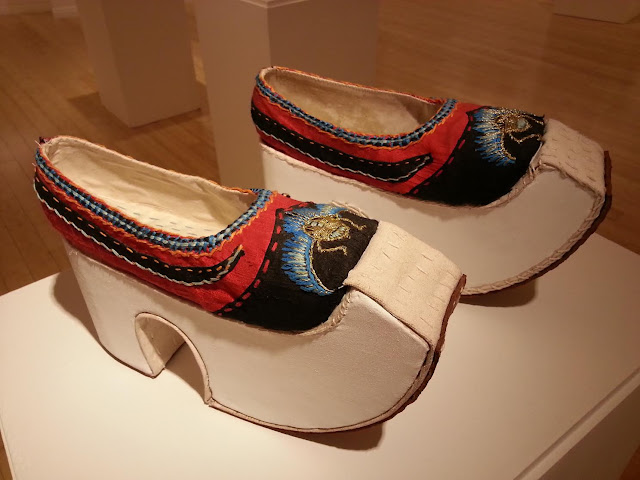 Embroidery, natural dyes, and hand stitching are celebrated in these shoes. 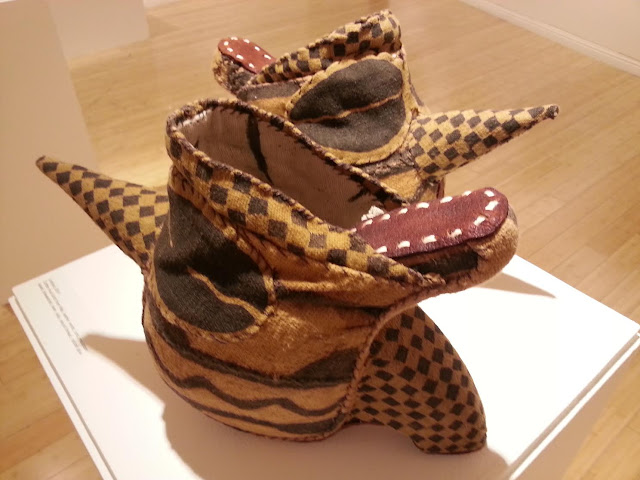 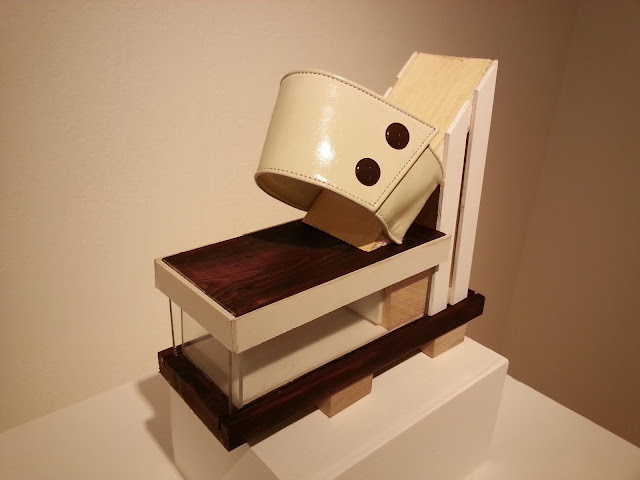 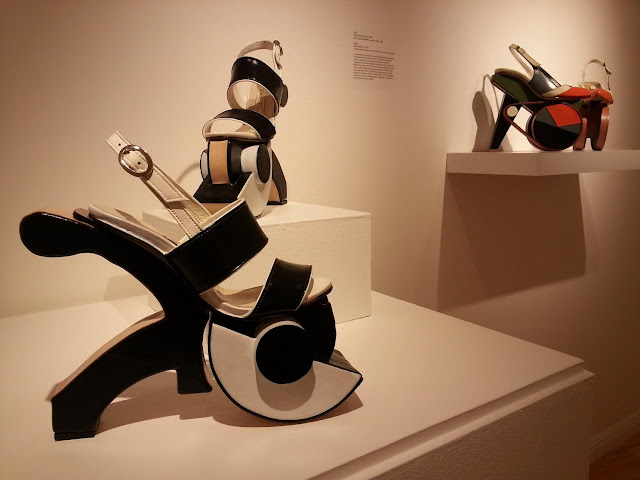 And the Bauhaus influenced these architectural beauties. 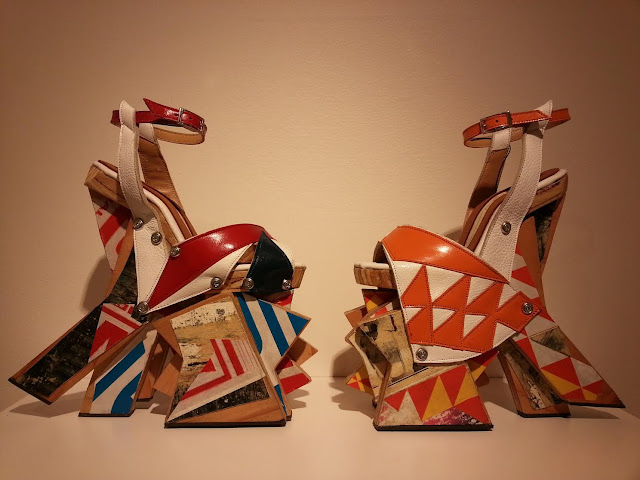 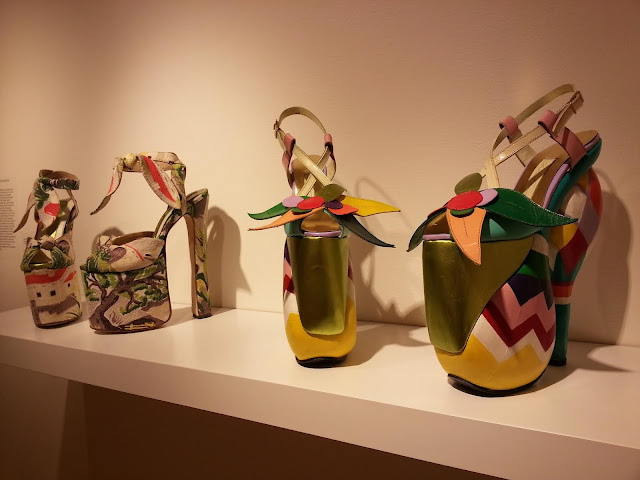 "How amazing would it have been to make shoes for Carmen Miranda?", asked Francis in an Instagram post. "I made these (right) for her in spirit, while listening to Xavier Cugat and thinking of the beautiful technicolor and geometric world of Busby Berkeley." 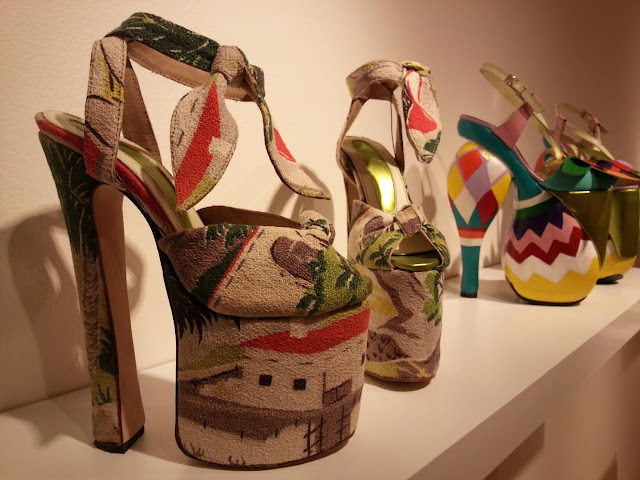 At first glance, the barkcloth shoes look relatively tame next to the vibrant odes to Carmen Miranda. But look closer. Not so. 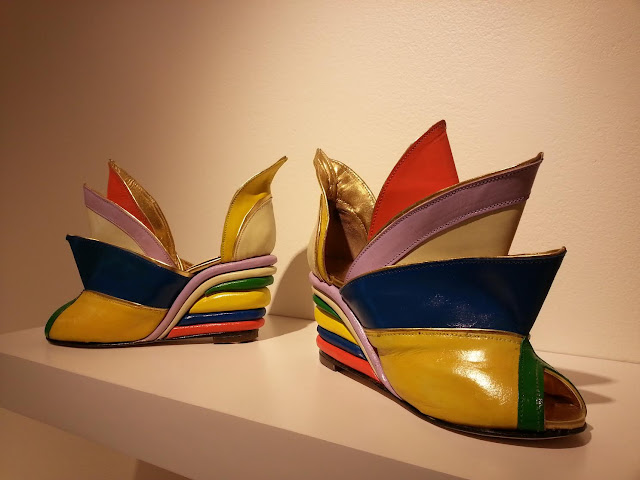 These fantastic creations (above) were featured in the invitation and press materials. 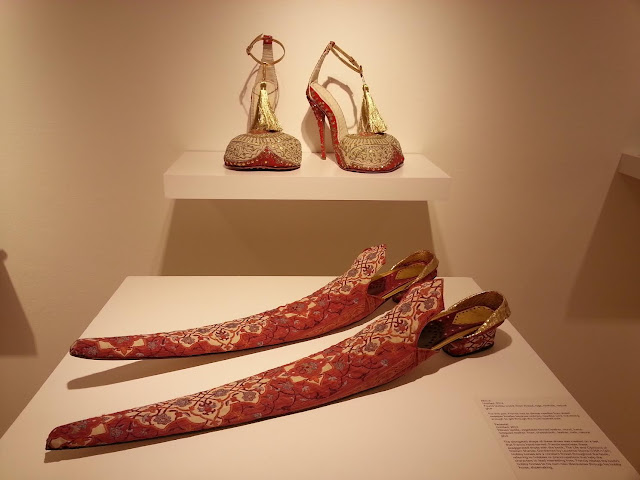 As a former scuba diver and in more recent years, an avid snorkeler, I dislike walking on the beach with ungainly fins; but I imagine the wearer of these extrusions would make that exercise look like a cakewalk. 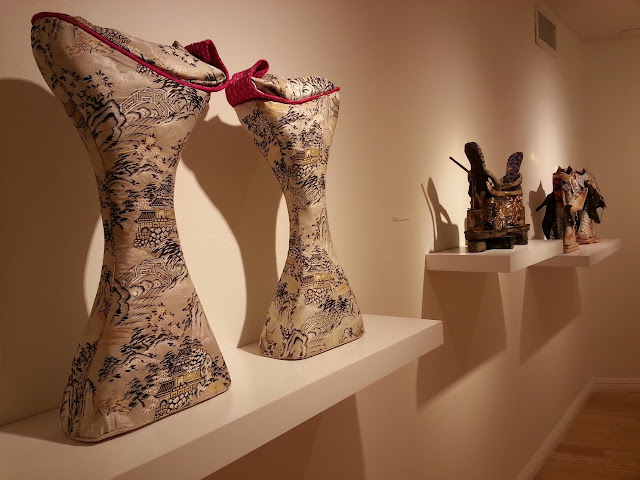 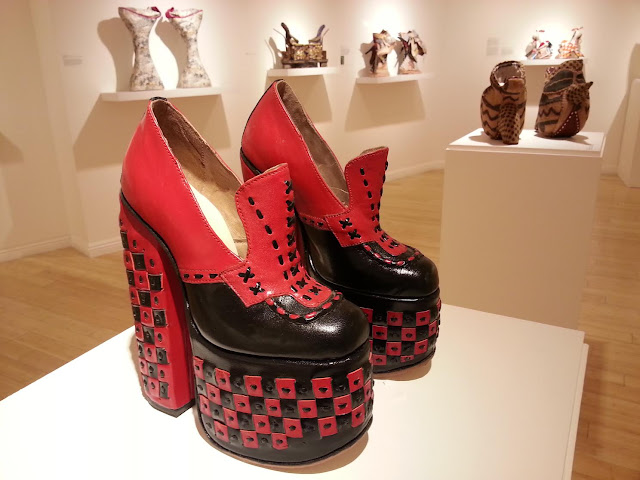 Fancy! Glittery party shoes dare the wearer not to have fun in them. 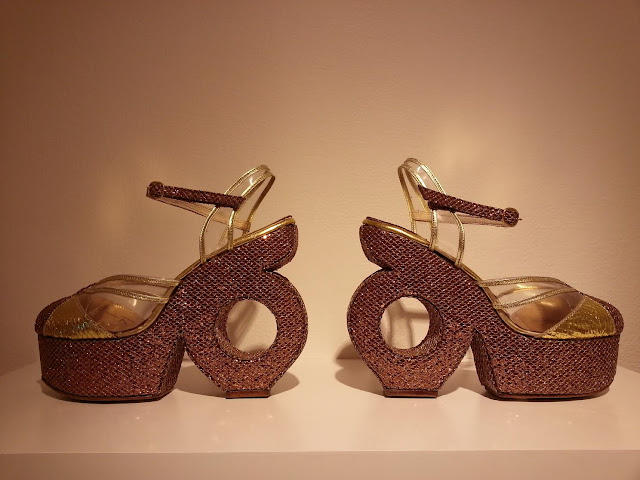 We leave the whimsical world of out-there shoes behind with each step up the stairs to the third floor. Here, we are confronted with art depicting situations where trippy shoes are unnecessary. 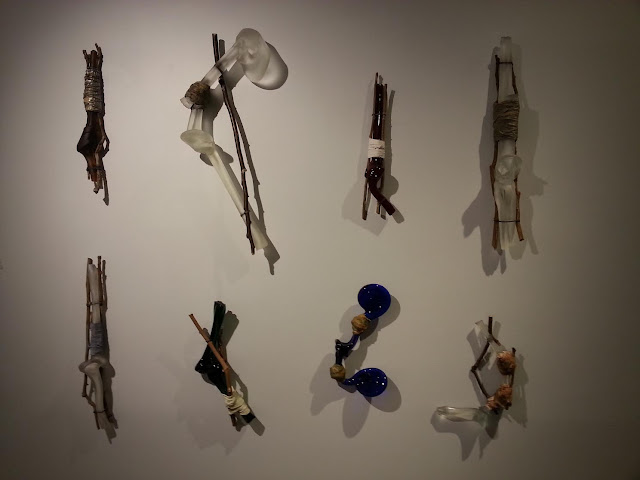 The somber Art and Other Tactics: Contemporary Craft by Artist Veterans is a 180 degree change. An excellent, in-depth review was written by Julian Stern for Savant Garde. Viet Nam veteran Michael Aschenbrenner (above), who suffered traumatic injuries himself, utilizes glass and mixed media to represent broken body parts and lost limbs of amputees. 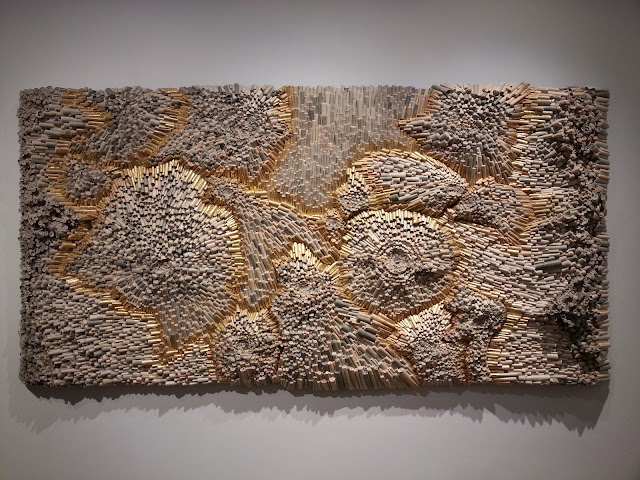 Though A Battle Lost: 8030 by Jenn Hassin is beautiful from afar and up close, it quickly takes on a haunting tone when we realize that the number in the title - 8030 - represents a deplorable tragedy. In 2014 alone, eight thousand and thirty veterans committed suicide. That's five times the national suicide rate. 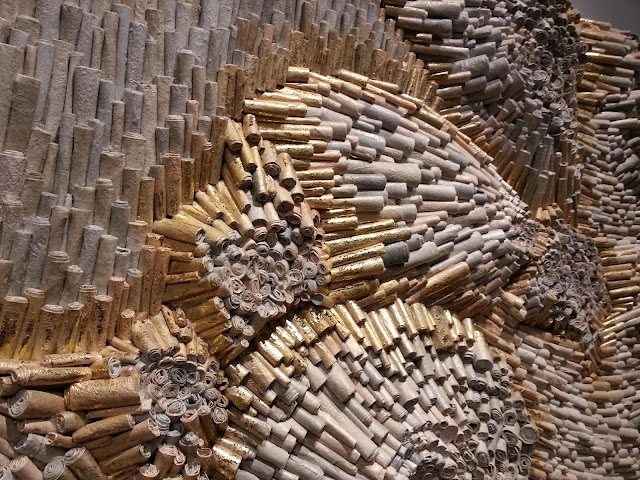 Each death is represented by piece of rolled paper... 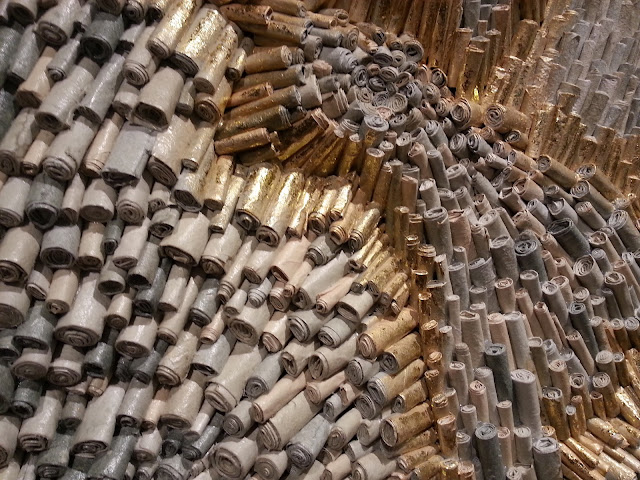 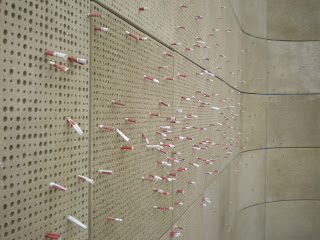 ...which brought to mind another installation inspired by war dead. 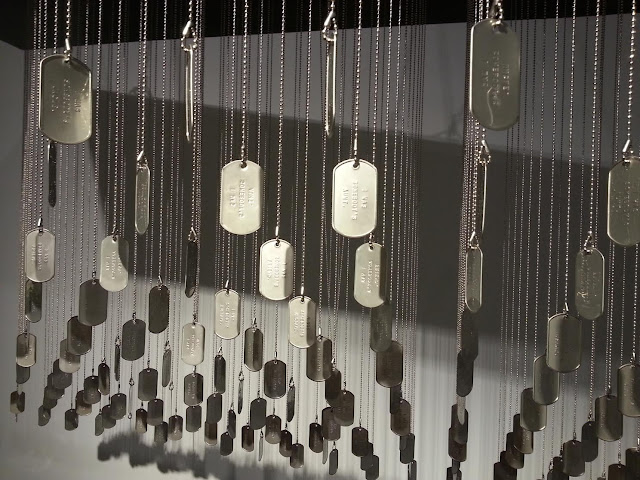 "I was someone's husband/wife/son/daughter/aunt/brother/mother/friend" printed on military-like dog tags removes the anonymity of war loss, begging us to ask the question: "What if it were my loved one?" Visualizing our precious relatives and friends on one of these tags personalizes the viewing experience, escalating it to a whole new level. 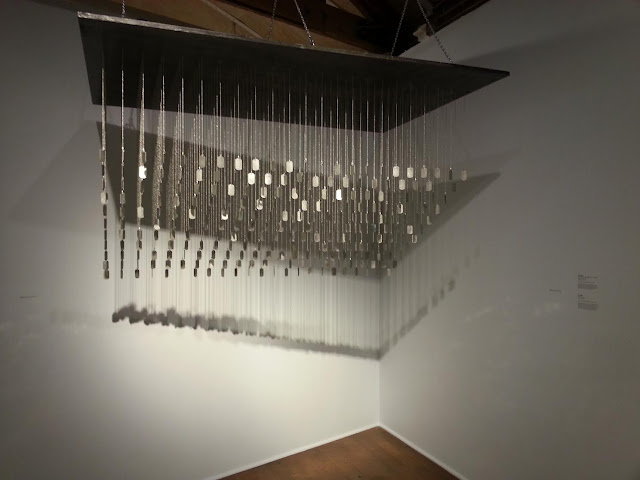 Teri McCans' poignant piece reminded me of another artist who uses dog tags as a medium to enhance the gravity of his message; I first saw the work of Do-Ho Suh, at the Seattle Art Museum. 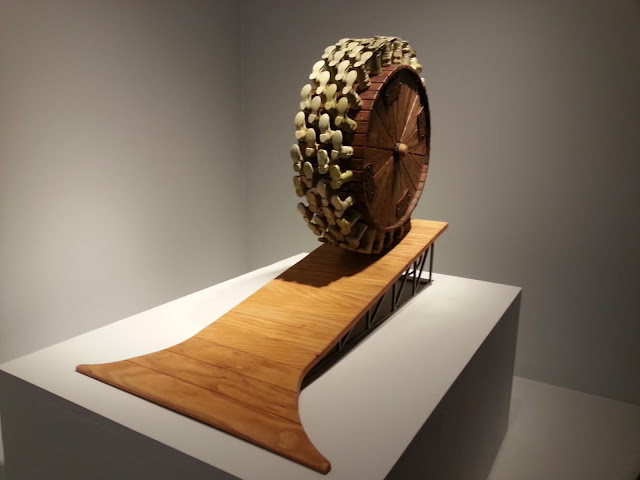 Ken Hruby's Juggernaut of Babylon literally rolls out "boots on the ground" while referencing the expendability of anonymous soldiers: there are always more. And once the wheels of war have begun to turn, there's no stopping the destruction. 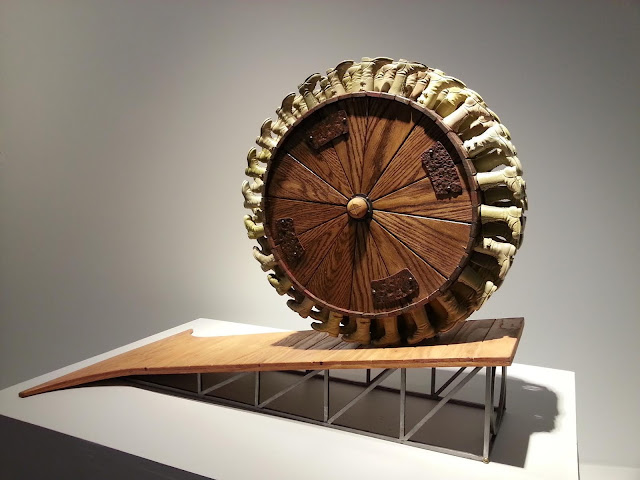 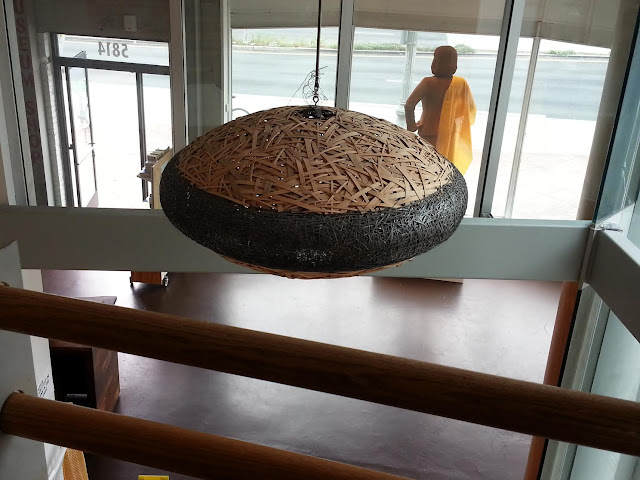 Descending the stairs, we catch a view of Aaron Kramer's elegant chandelier, made from recycled street sweeper bristles and coffee stirrers. I've been lucky to enjoy a piece of his in my home for many years. Though we were once neighbors in Venice, California (where he had his studio) Aaron has since moved to London. 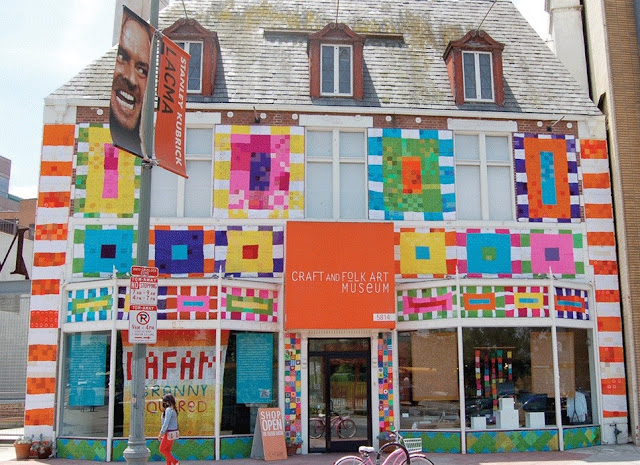 You never know what the exterior of CAFAM will morph into. A couple of years ago, the facade was "yarn bombed" with crocheted squares submitted from around the world that were later made into quilts and donated to the homeless. CAFAM is a museum with a mission to show quality art while working for the greater good on a number of fronts. Pop in to see what's new, or to pick up unique artist handmade gifts at the convenient street level gift shop.