Alf Engen Ski Museum is the only regional ski museum in the United States to be named after an individual, a testimony to the man's importance to the sport. Norwegian-born Engen was a world class skier in the 1930's who envisioned Utah as an international ski haven and made it happen with the help of other ski enthusiasts. 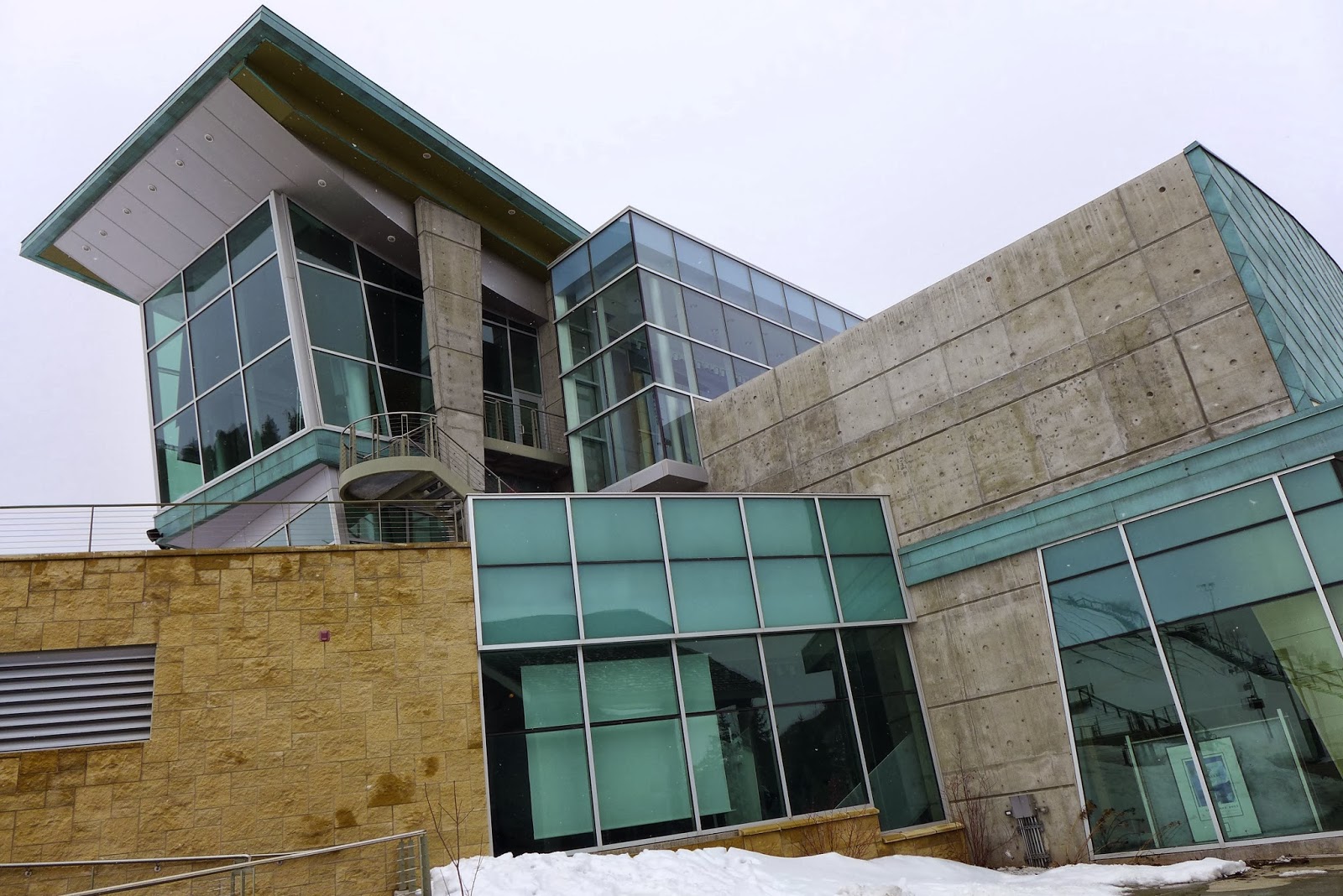 The ski jump inspired roof line, a false front etched in snowflakes, and green glass to lessen solar glare on sunny days are details that reflect the building's unique subject and mission. It took from 1989 to September 2002 to realize the dream of the combined museum and winter sports park, which opened just in time for the Salt Lake City Winter Olympics. 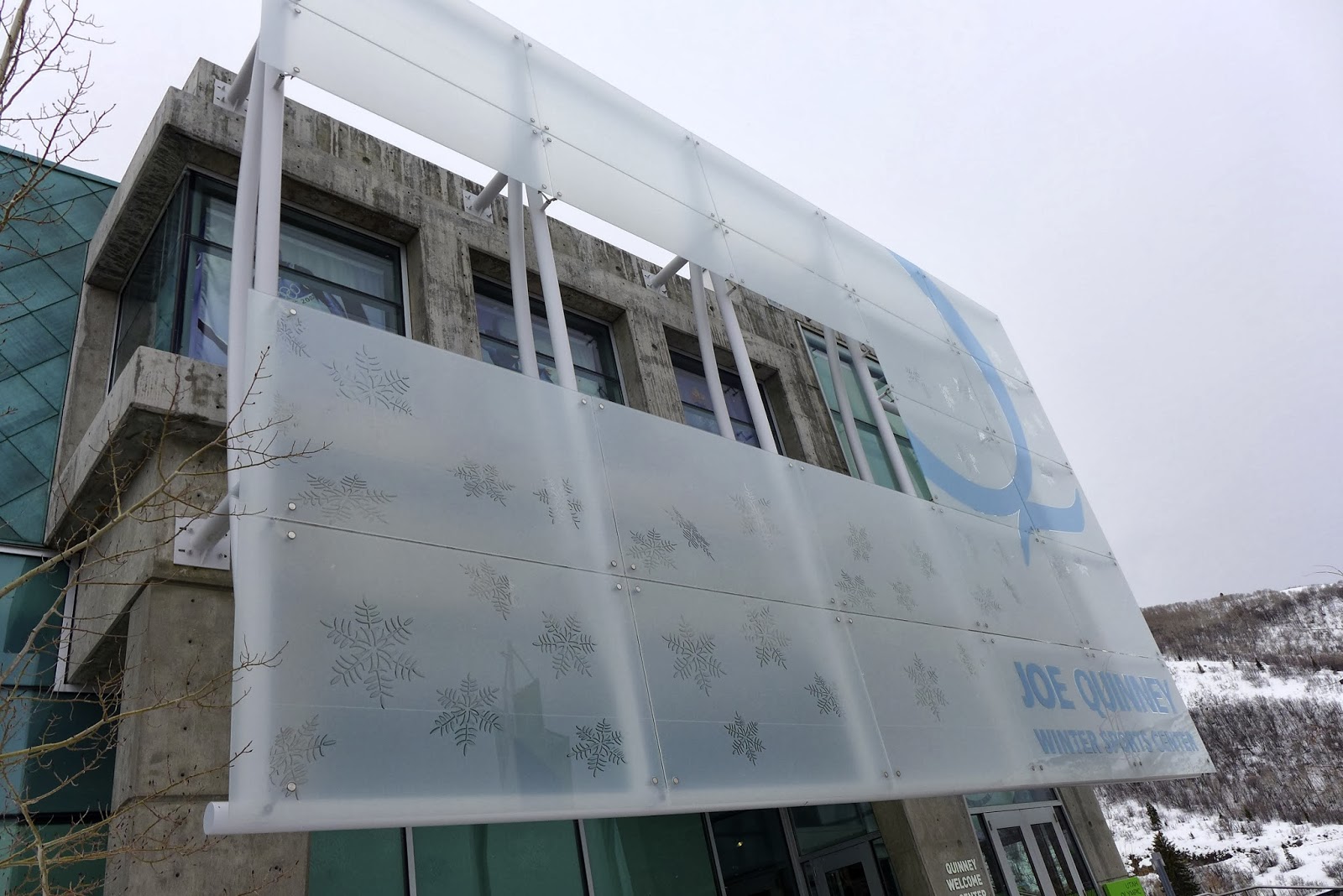 Though admission is free, a number of experiences can be purchased, from riding a real bobsled on an actual outdoor run, to the virtual experience of doing so indoors. The Joe Quinny Sports Center is named after another devoted backer of the ski industry in Utah. 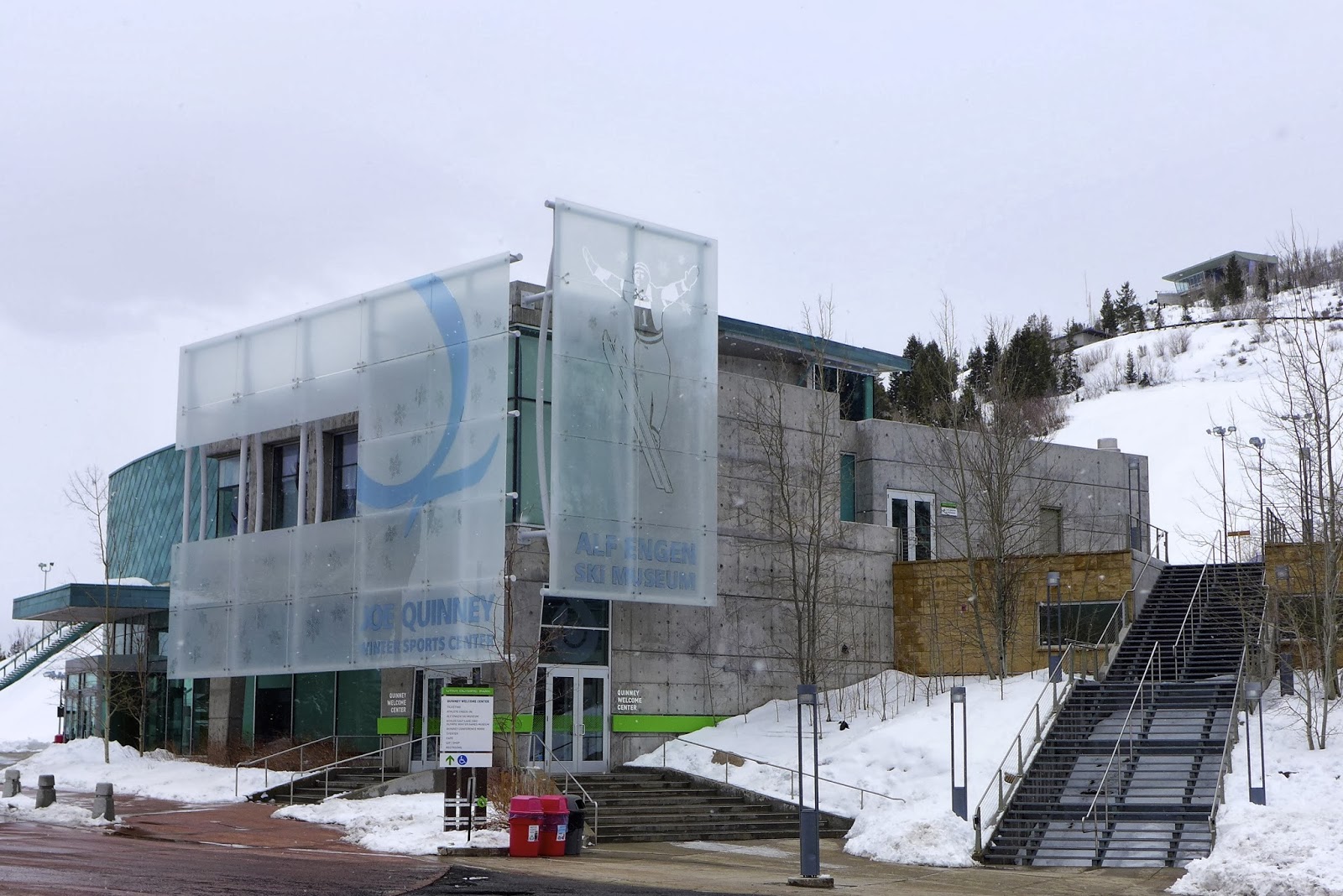 Behind the museum and sports center complex are plenty of hills and runs for ski and snowboard lessons that are overseen in conjunction with the the Quinney Sports Center. 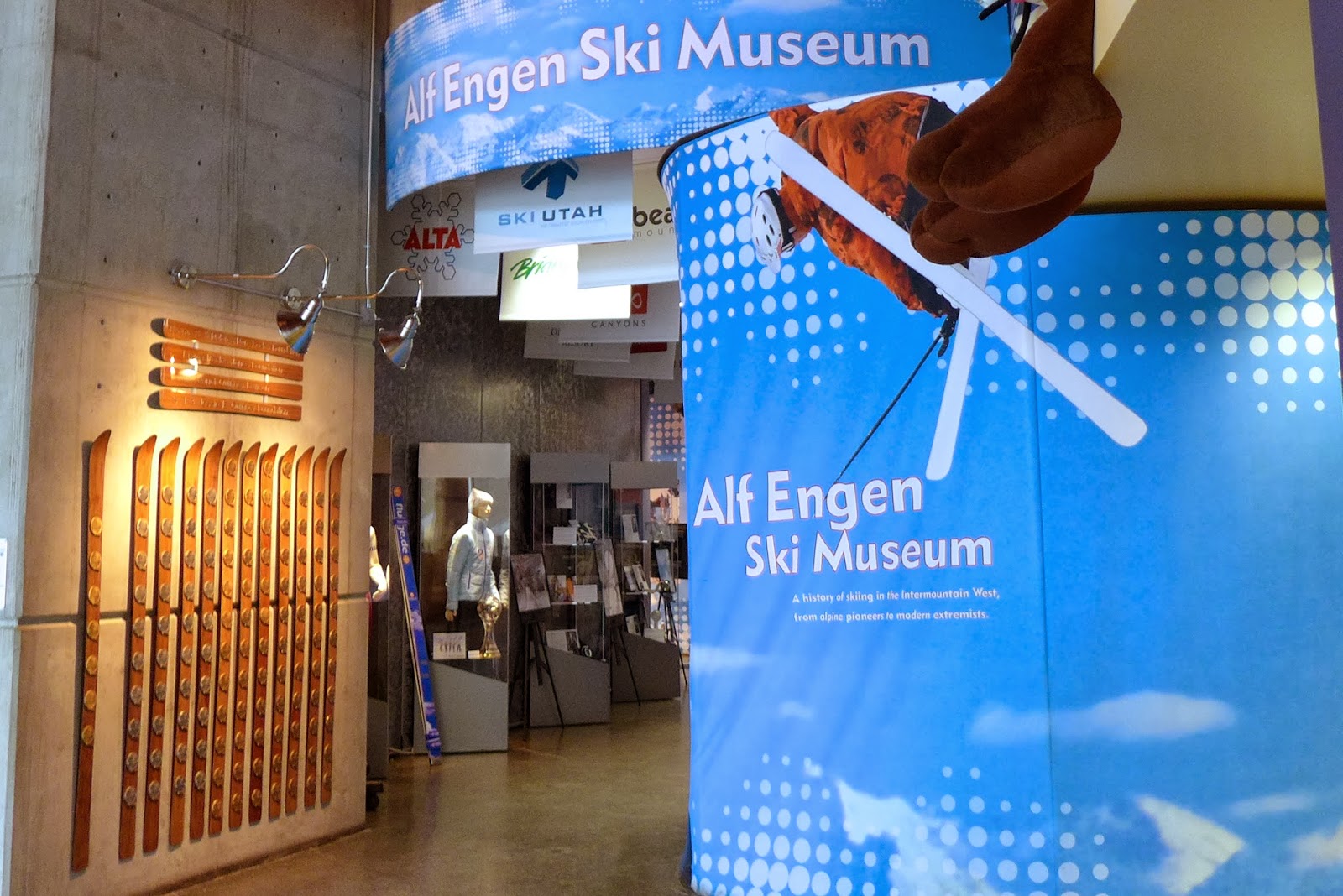 Upright skis are an innovative way to display museum donors' and board members' names. 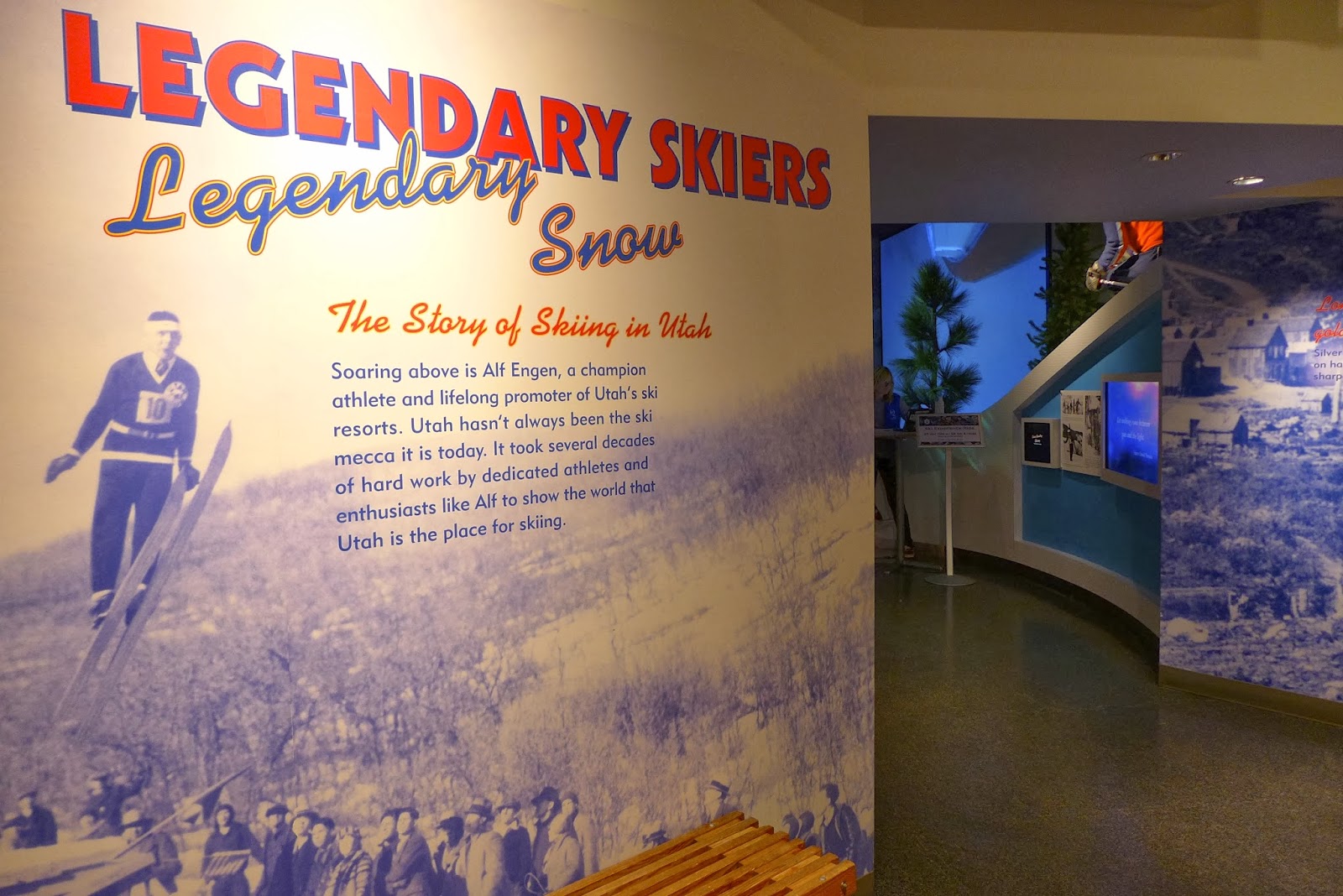 Why was Engen so enthusiastic about this area for skiing? Besides the beauty of the mountains, it was the snow. Utah is famous for its 'powder'. Dry, light and fluffy, it contains much less water content than snow in other areas of the country. These comparisons show how much snow it takes to make one inch of water in the Sierras versus Utah's Wasatch Range. Huge difference! 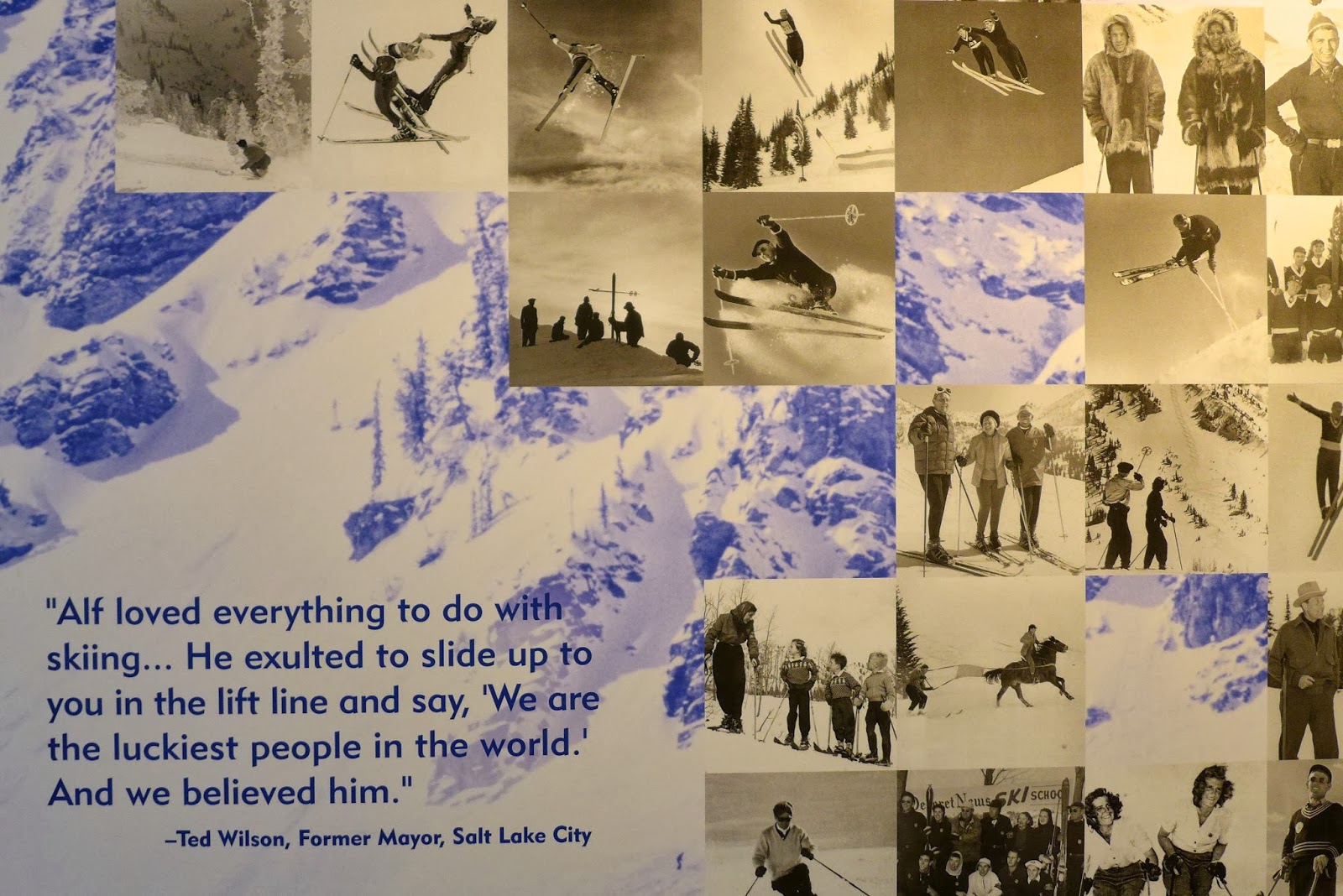 And what was so special about Alf Engen? Known as the greatest skier of the day, he adored the sport and was it's biggest promoter. As well as being a world class competitor, he was a beloved ski instructor who helped create the ski school at nearby Alta, teaching up until his death at age 88. He also helped establish thirty other ski resorts in the western part of the country, all while lobbying for the Olympic Games, which sadly, he did not live to see. 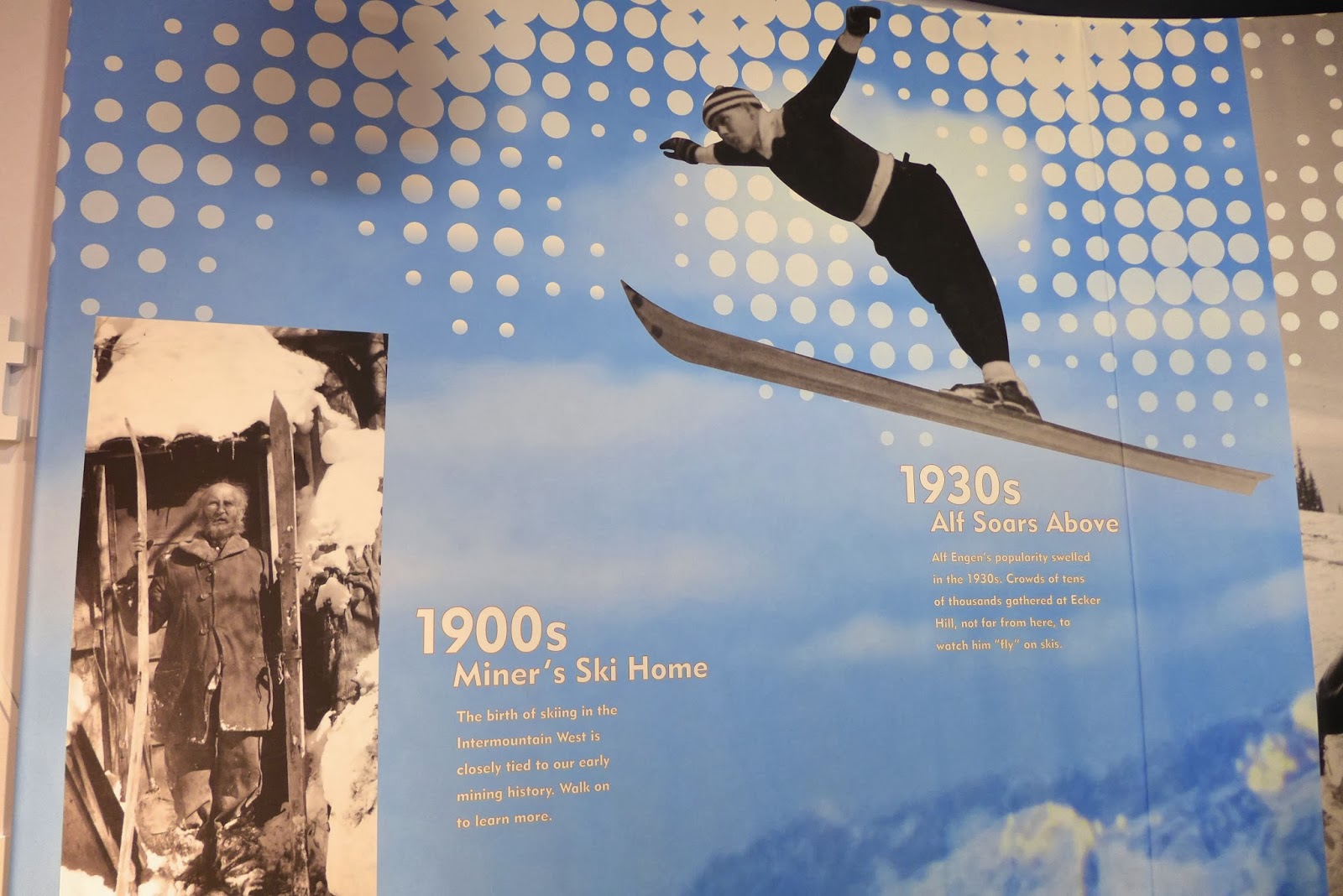 For gold miners in the area at the beginning of the century, skiing was a necessity, with fun as a byproduct, and often the only way to get into back mountain country during the harsh winter months. Thirty years later, Alf Engen focused on the fun part and spent a lot of time flying through the air. 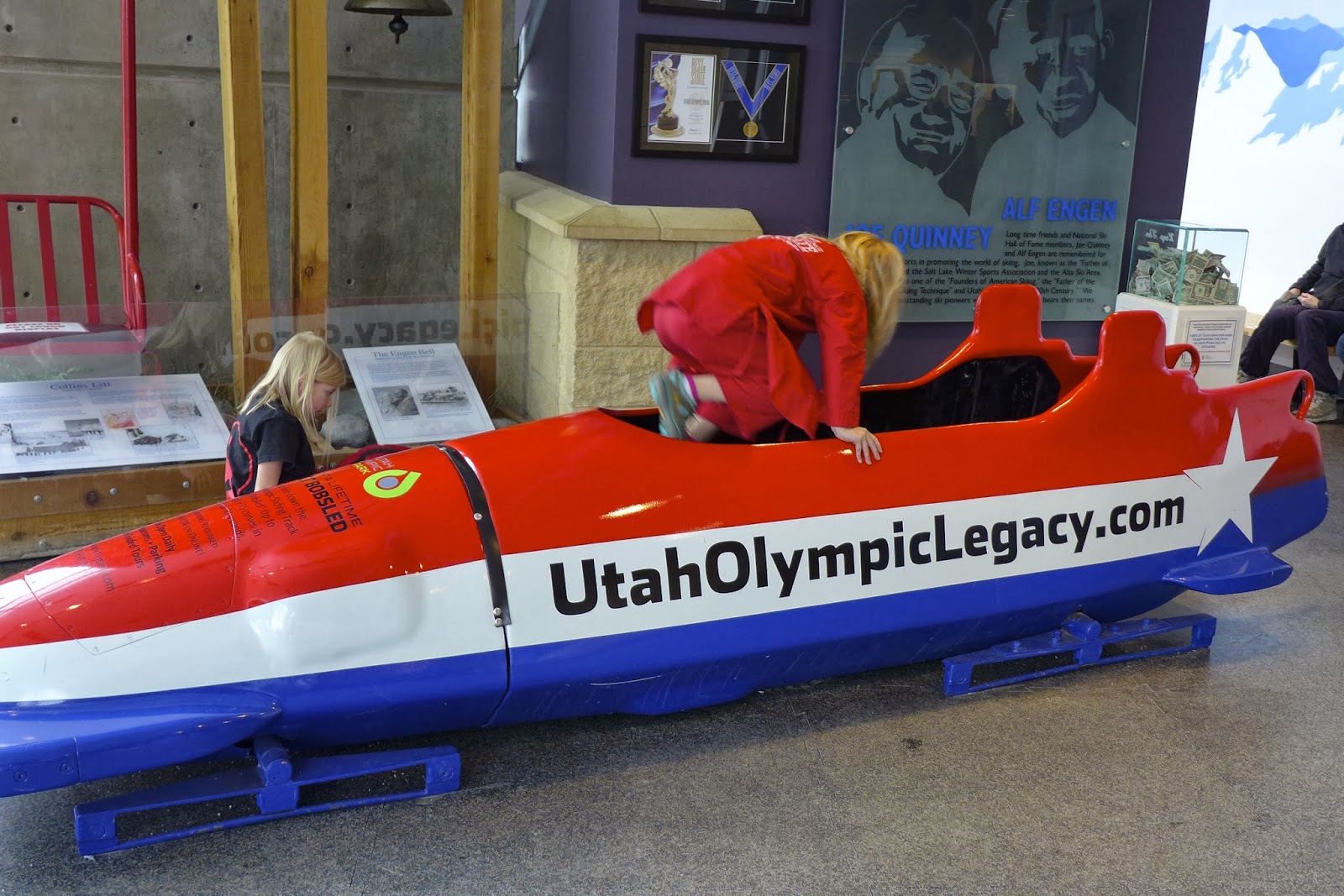 Since 2002, the museum's completely grant-funded field trip program has allowed over 10,000 students to participate; for many, this is their first experience in the mountains. Kids are most welcome to play on the bobsled above and dream of racing it across the finish line - coming in first place, of course. Not real comfy seating, but it's luxurious compared to the sleds below. Sharp metal blades of the luge and skeleton are covered with leather for protection of the blades and handlers' hands. Though both sleds are steered with only body angles and weight (there are no other steering mechanisms) and can reach speeds of up to 90 mph, their different contours determine how each will be used. On the red luge above, the racer lies on the sled on his or her back, feet first. Conversely, the blue, taped-up skeleton is ridden lying face down, head cradled in the curve, with the rider careening down the mountain head-first. Head. First. Makes my head and neck hurt just to think about it. 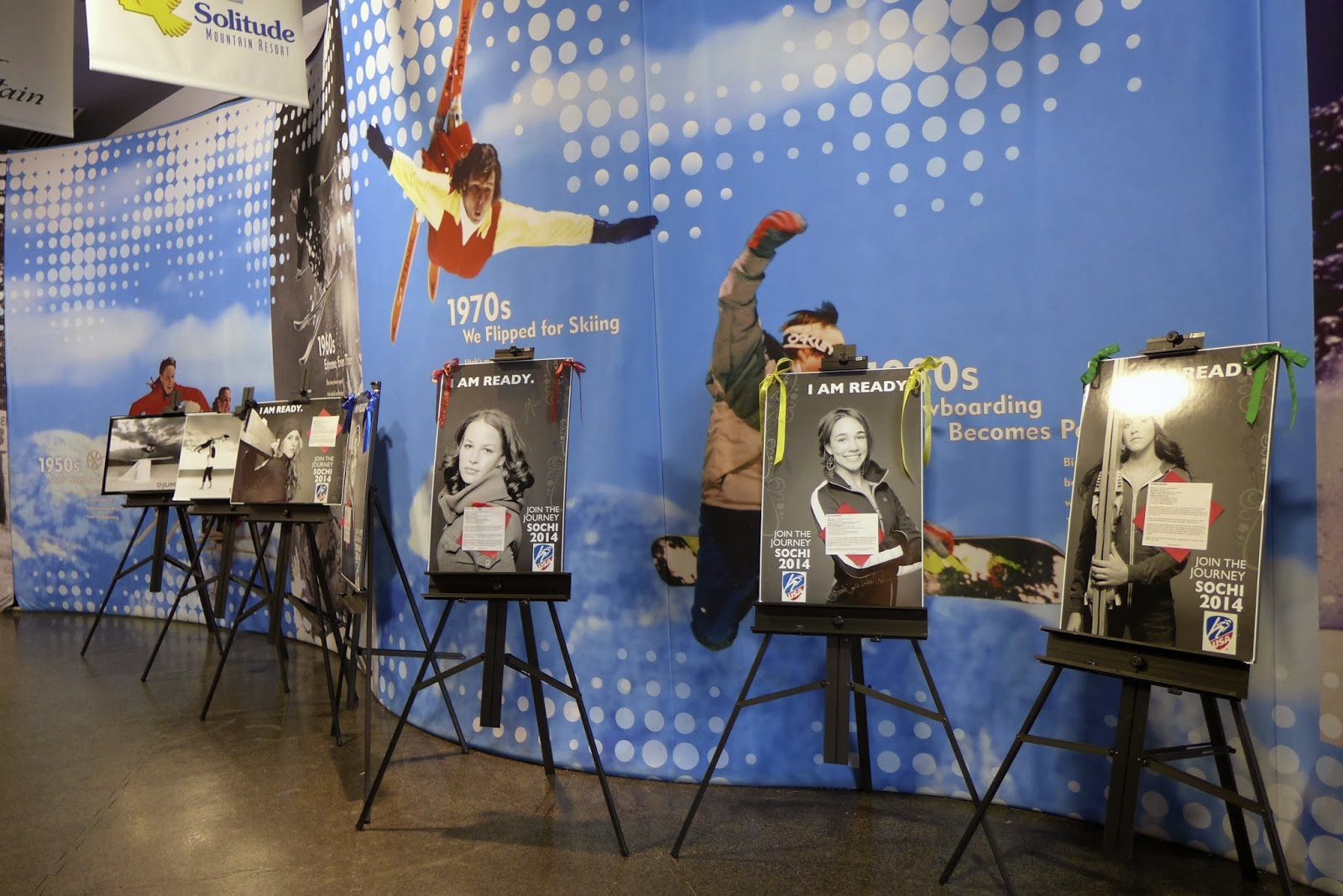 Olympic contenders from the area line the entry that depicts changes, innovations, and inventions that have taken place in the sport over the past century. 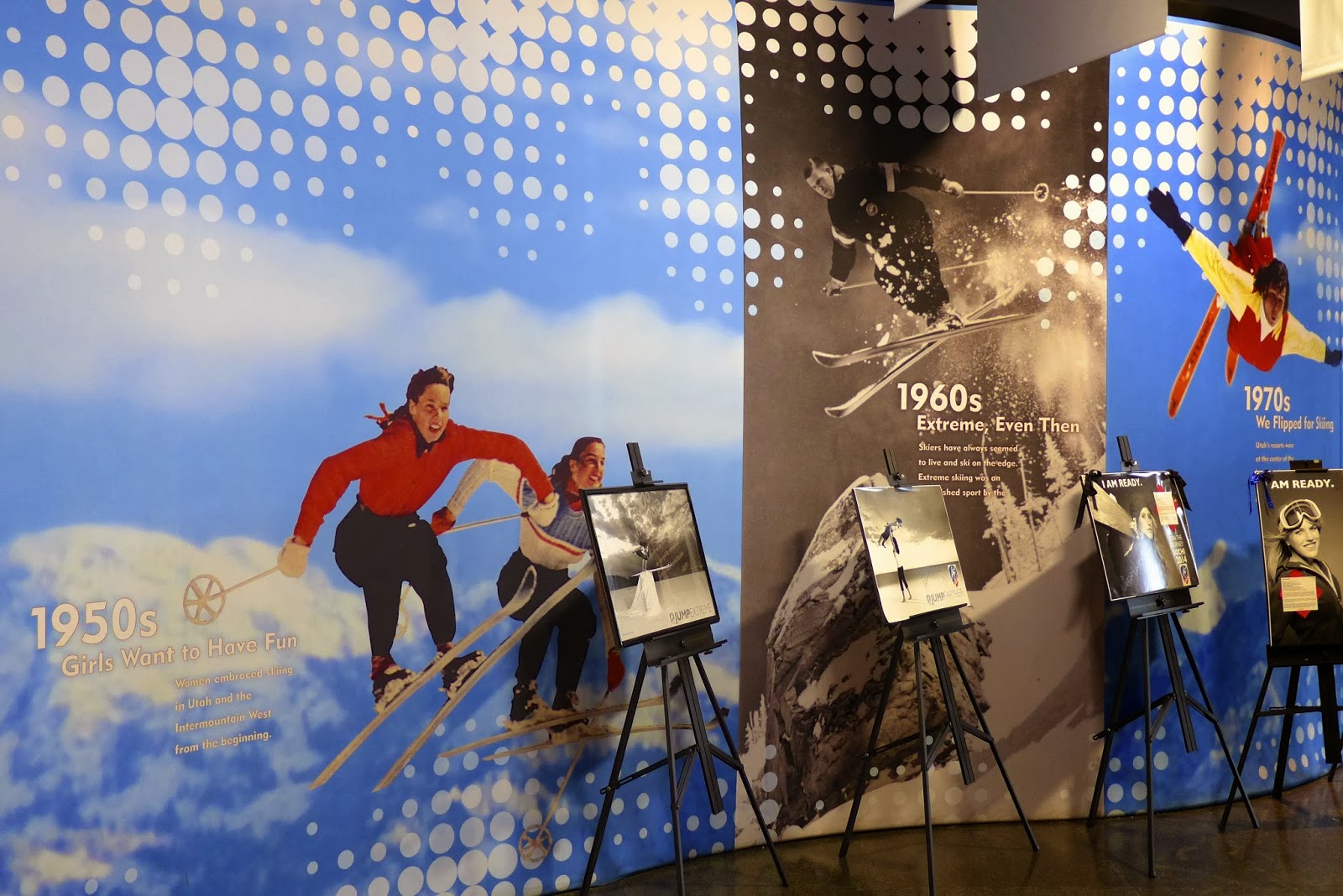 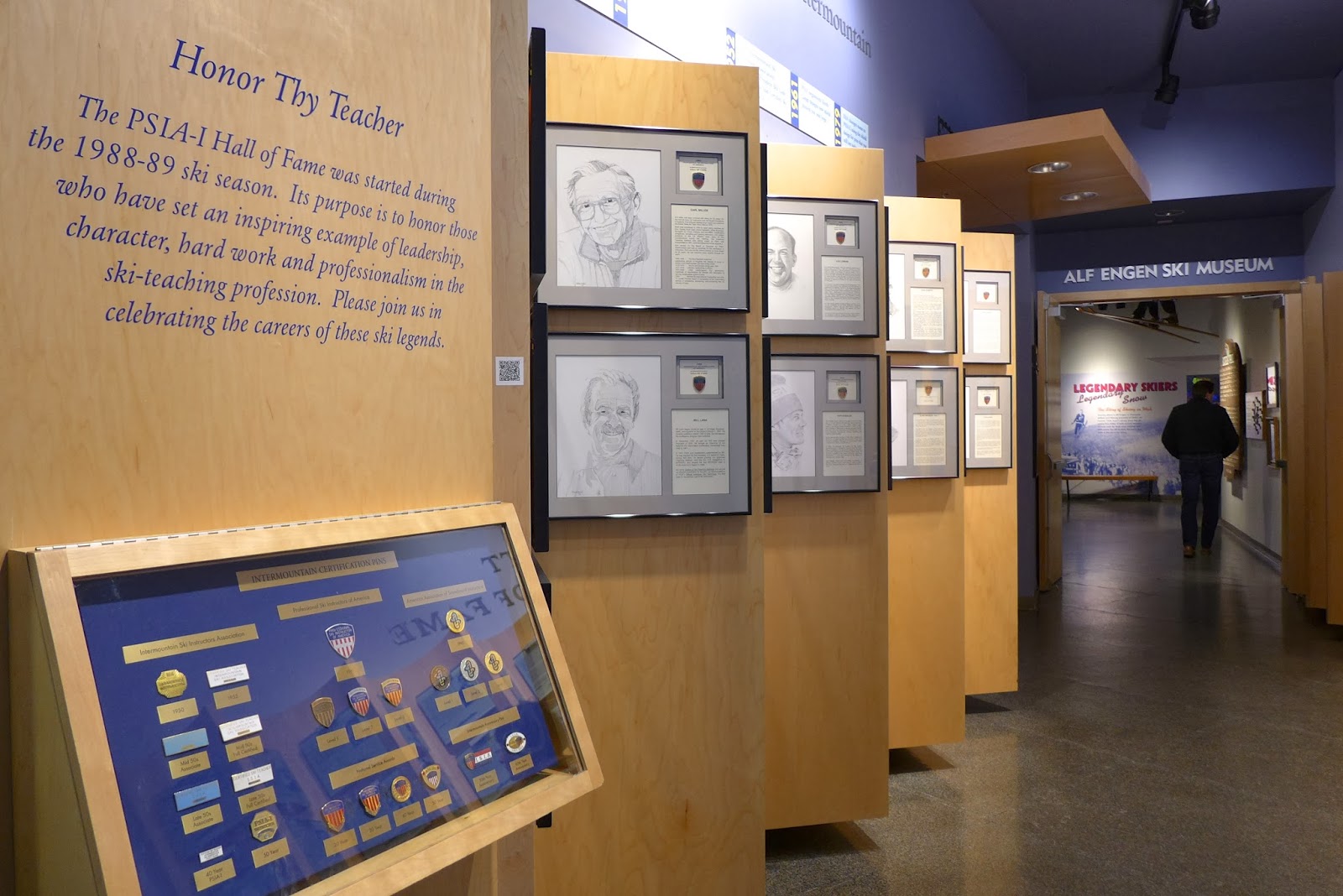 Teachers behind the champions are given some of the credit they deserve in this Hall of Fame. Here, exceptional teachers and trainers are lauded for their combined qualities of leadership, character, and professionalism with a willingness to put in the necessary time and work to help students achieve their personal best. 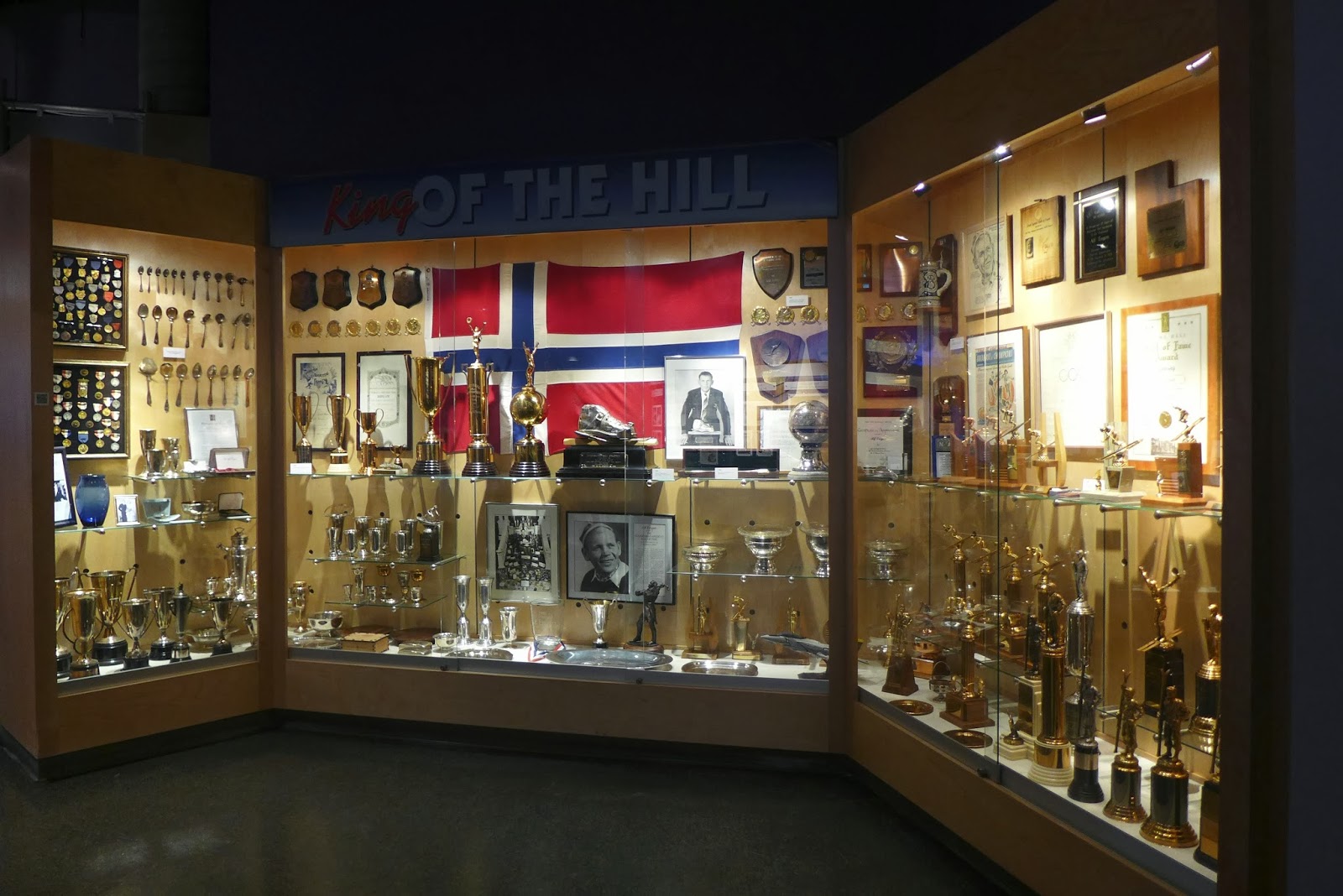 Trophies, medals and memorabilia from a legendary career. 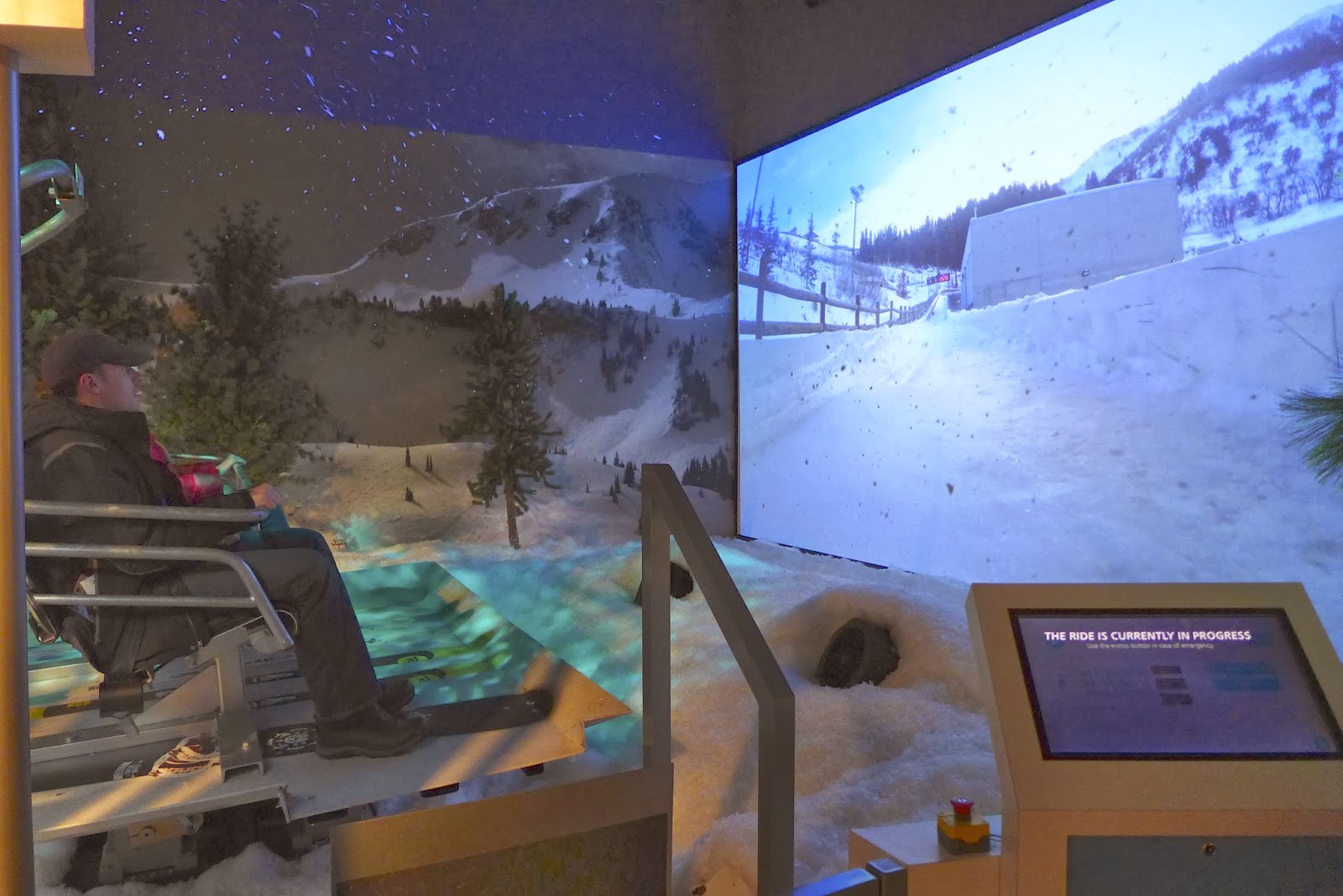 In the comfort and warmth of indoors, these people sitting on the stationary chair lift paid to experience the thrill and adrenaline rush of a virtual downhill run, complete with snow and the sound of wind. 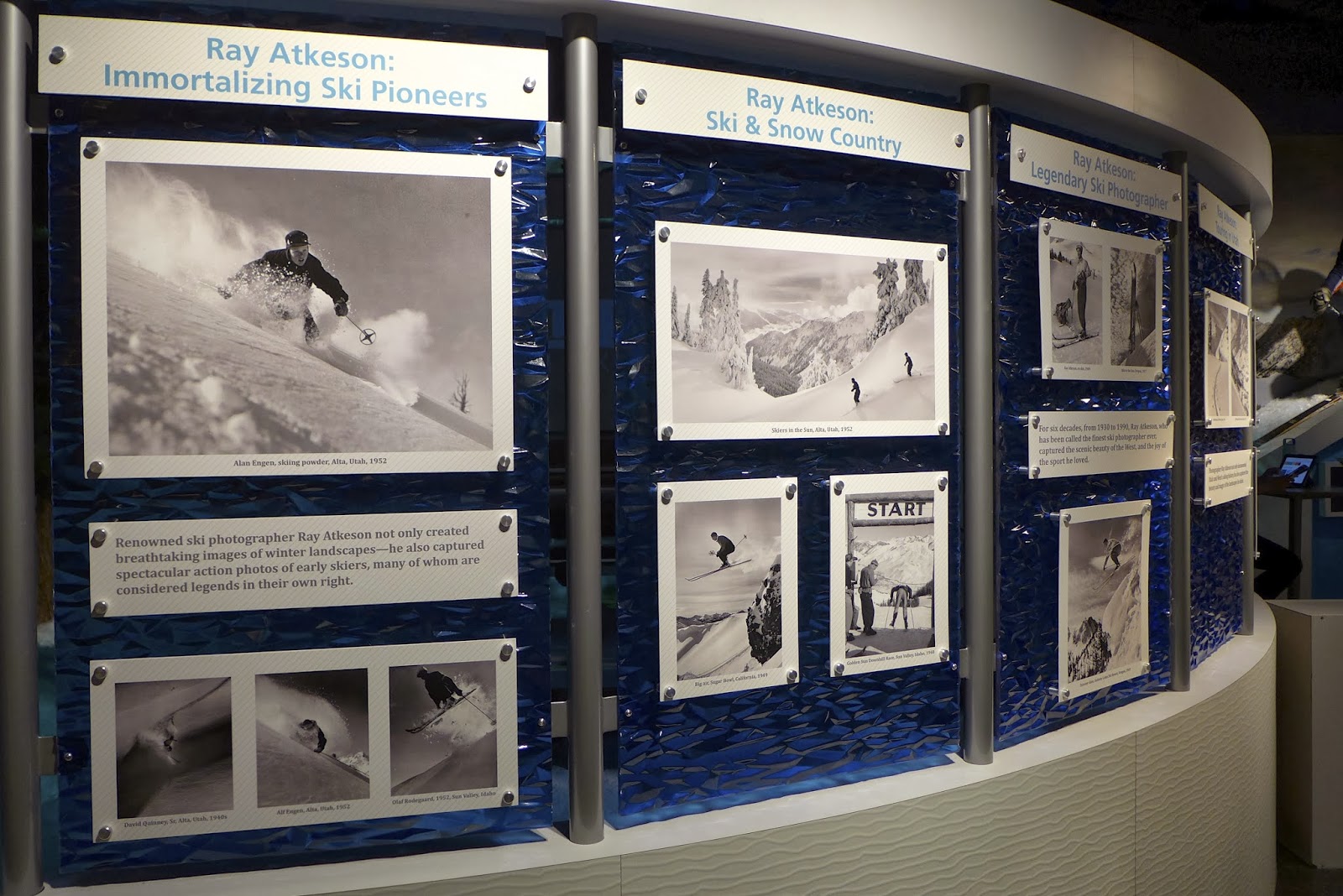 Ray Atkeson was a photographer from Oregon who used large format cameras to document the beauty of the western mountain ranges of the United States from the 1930's to the 1950's. During those twenty-plus years, he also created several thousand black and white images of skiers in motion doing amazing jumps, stunts, and aerial acrobatics that brought appreciation from the masses to the sport, and the museum has a large collection of those photos. 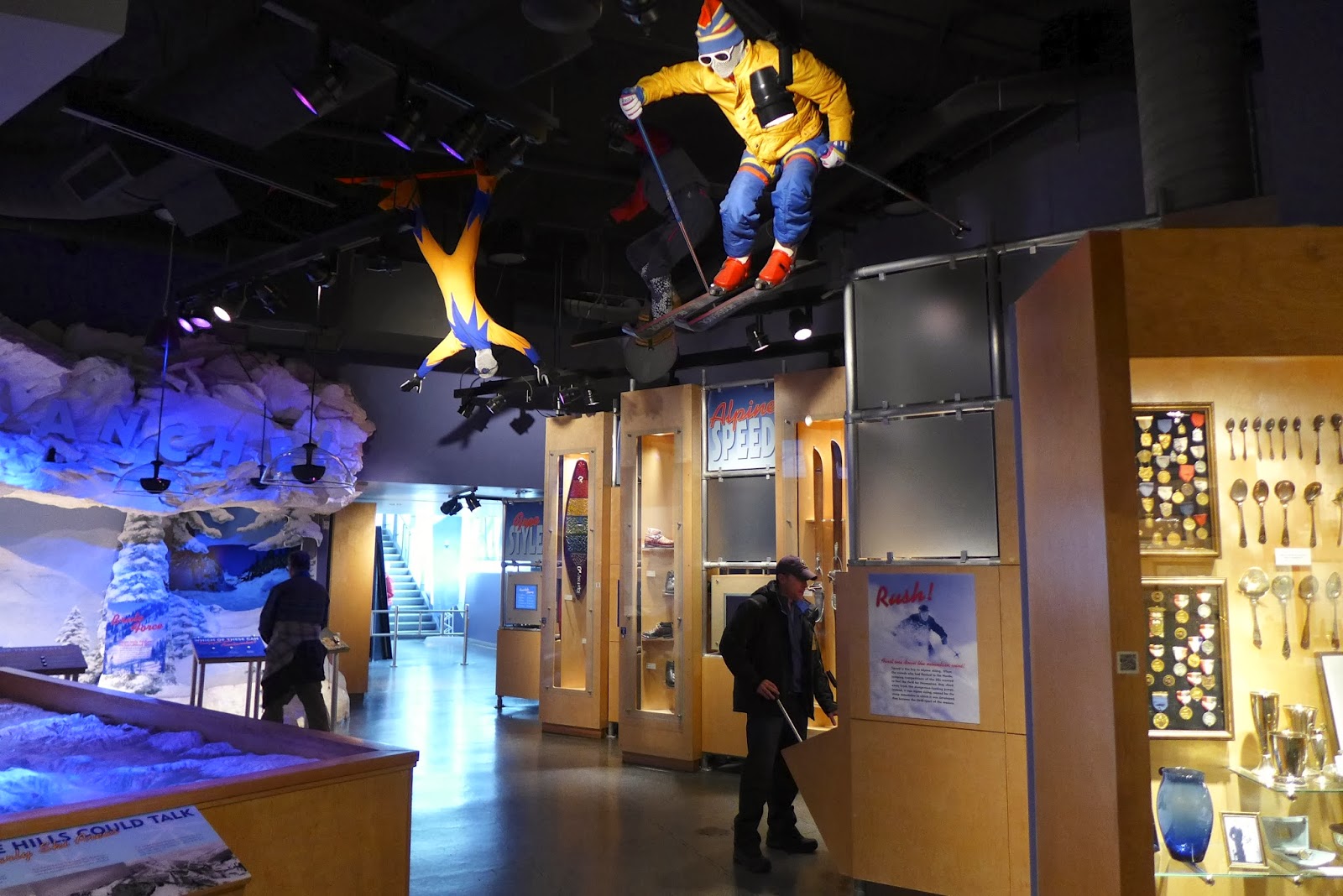 A display of the Wasatch Mountain Range leads into the Avalanche! video that was so popular on a previous post leading to this one. 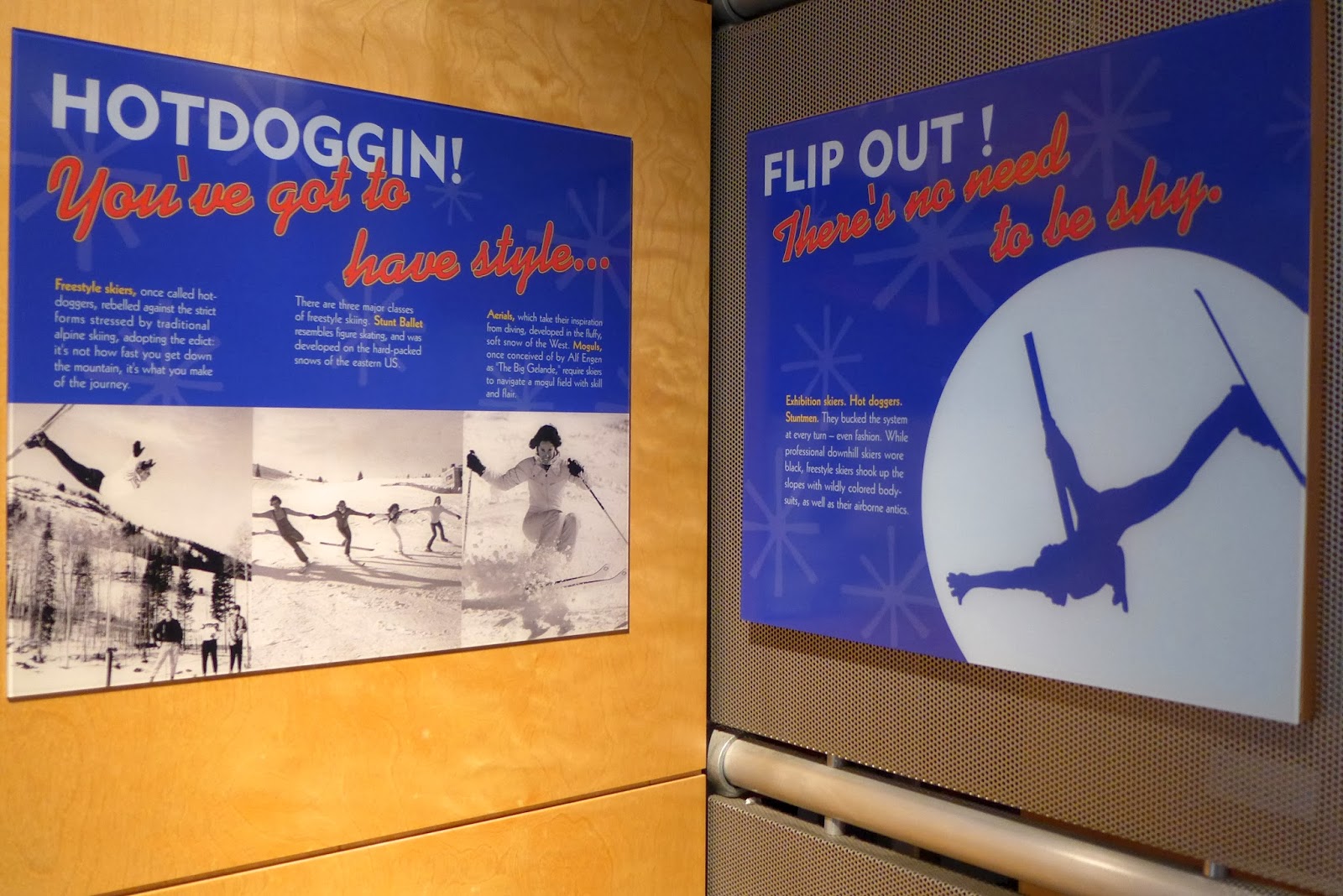 Before there were snow and skate boarders, hot doggers were doing unbelievable freestyle stunts. Below right is a plaque from Ecker Hill, where the idea for a world class jump was conceived, and where Alf Engen broke five world records which lead to him receiving the "Skier of the Century" award. In this bronze sculpture of Engen and Quinney, Utah artist Kraig Varne employed the 'lost wax' method, a laborious process that's been used for centuries. Lest you thought we weren't going to talk about art in this post, here's an explanation of the historic process in a video by the Getty.